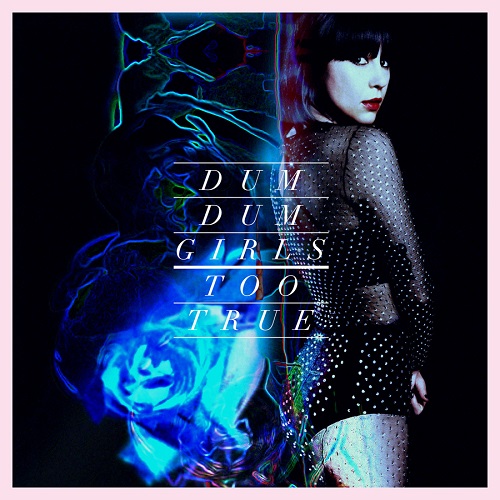 Dum Dum Girls have returned with their latest record, Too True; the band’s third studio album which will release next week. Too True will be their first full-length album since Only In Dreams (2011) and will follow their 2012 EP, End of Daze. The album is once again produced with the assistance of Richard Gottehrer and The Raveonettes’ Sune Rose Wagner, both names associated with Dum Dum Girls in the past. Front woman Dee Dee claims that End of Daze; “signalled exactly that; an end to a part of my life that was confused, difficult, disastrous, and at times, redemptive.”

While Dum Dum Girls take their music in a slightly different direction with Too True, they stay the course throughout the album. At a slower tempo and viewed through a kaleidoscope, the album is a 60s glam-pop dreamland, viewed best as a shimmering, hazy desert of beautiful sadness. Similar to their previous albums, a lo-fi atmosphere is apparent without sacrificing production quality. However, Too True has more of a melancholic aura than the upbeat sophomore album, Only in Dreams. Comparing it to the band’s previous records, there is a clear evolution of their sound and message.

The authenticity of Too True lies in whether it’s 60s dream-pop epiphany can be believed as an inspired commendation, or rather dismissed as pretentious name-dropping. Dee Dee notes several figured which she claims to have resonated so deeply when writing the album that she felt as though they were like artistic collaborators, such as “Rainer Maria Rilke, Anaïs Nin, Arthur Rimbaud, Paul Verlaine, Charles Baudelaire, Sylvia Plath;” and, “the punk poet singers Patti Smith and Lou Reed.” She even pays homage to the 19th century poet, in ‘Rimbaud Eyes,’ one of the album’s more repetitive tracks.  “So much of my life has been defined, aided, and even saved by music. Here is my best attempt at joining the rock ’n’ roll ranks, of chasing pop into the dark.”

With many of its tracks written in close succession over a period of weeks, the record is undoubtedly focused and cohesive. Unfortunately the binge writing could also explain some of the more uninspired lyrics on the album, such as in ‘Rimbaud Eyes.’ (Dee Dee sings, “You got Rimbaud Eyes” fourteen times in the three and a half minute song.) Dee Dee also claims that she wrote some of the tracks on Too True locked up in a New York apartment, and then later in Hollywood at the infamous Chateau Marmont. Her “drunken loneliness” and the atmosphere of her writing echo loudly in the lyrics.

Notable tracks on the record include the album’s lead single; ‘Lost Boys and Girls Club,’ (which had support from multinational retail-clothing company, H&M, in its official music video) the album title-inspired ‘Too True To Be Good,’ and the longest track on the relatively short album (clocking in at just over four minutes); ‘Trouble is My Name.’

Is Too True the album that will recruit Dum Dum Girls into the rock’ n’ roll ranks? Probably not. However, it could easily be considered the best Dum Dum Girls record to date, showing just how far the band have already come.

Too True is released on January 27 via Sub Pop.