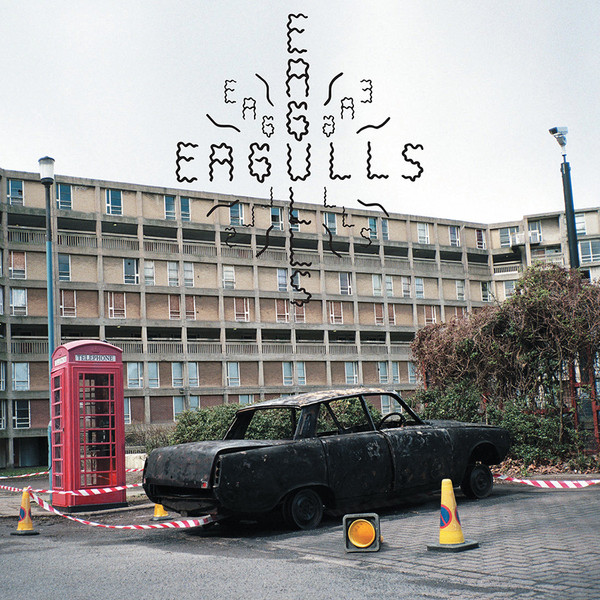 Kicking off with the rather splendid ‘Nerve Endings’, Leeds’ new young starlets Eagulls’ self-titled debut is nothing to be sniffed at. Howling vocals, thunderous guitars, thumping bass lines and seismic drumming drive this album towards being one of the better debuts of the last few years.

Having built up a rather exciting live reputation, there is always a sense of worry about transposing that sound in to a recorded sound, yet these guys need not fear. The overall sound is that of travelling back into the late days of early 90’s grunge and dragging it kicking and screaming into the “20-tens” by it’s hind legs. It’s been a while since a British album had this much attitude.

‘Yellow Eyes’ and ‘Possessed’ bring out the screaming vocals we have come to love from Eagulls front man George Mitchell. In short, it’s almost a hybrid between Gallows and Nirvana. Although the guitars are a little low in the mix, it detracts nothing from the aural landscape that crosses your mind as you sit back and listen. Mark Goldsworthy’s guitar lines shine throughout, but Tom Kelly’s bass is what brings out the New Order/Joy Division sound with perfection. Henry Ruddel’s drumming is the icing on the cake in propelling each finely crafted track forward and into the driving seat.

‘Tough Luck’, ‘Footsteps’ and ‘Opaque’ are further highlights on an album that rarely falters in style and musicianship. It has been a while since Great Britain had a decent “angry” guitar band and Eagulls are the latest in a new wave of acts pushing this genre back to the masses. ‘Hollow Visions’, ‘Fester/Blister’ and the screeching ‘Soulless Youth’ showcase a band with a whole heap of potential. You get swept along by the sheer majesty of each track. Sounding raw but so expertly polished.

By the time the album draws to a close with the final notes of ‘Soulless Youth’, you feel consumed but an intensity that can only be released by hitting that play button again. Eagulls is pure addiction. End of.

Eagulls is out now via Partisan Records.