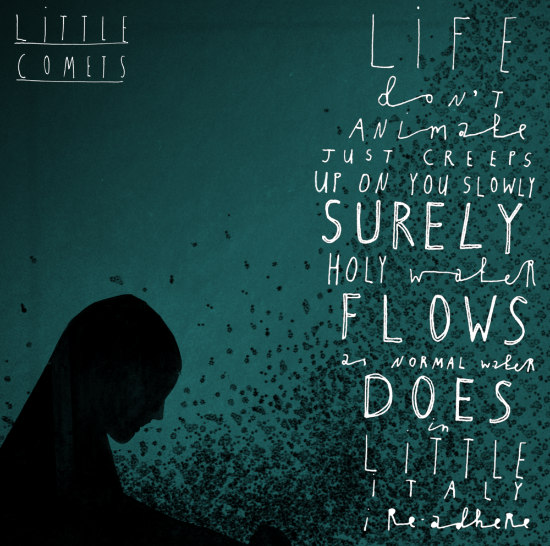 Tyne & Wear guitar-pop trio Little Comets have come a long way since they first broke onto the scene way back in 2009. While songs like ‘Joanna’ and ‘Dancing Song’ were undeniably catchy, and irresistibly likeable, they weren’t exactly aiming to be a challenging listen. That in itself wasn’t a fault, but it is interesting to hear just how much the band have grown on their latest release, The Gentle EP. Having released two full-length albums in between, they’ve had plenty of time to hone their craft, and the result is an EP that speaks volumes for their growing maturity as musicians.

Opener ‘Little Italy’ is a contemplative and self-reflective number, whose jagged chord progressions and cascading keyboard chords combine to create a surreal, almost psychedelic sound. There are hints of ‘Baba O’Reilly’ in its powerful vocals, keyboard runs and pounding drum beat, kicking in after the first chorus. ‘The Blur, the Line, and the Thickest of Onions’ is a harrowing, heavily electronicized song about the treatment of women in society. In its echoing, industrial beats and isolated vocal performance, it’s heading towards the same sound that the likes of Bastille made so popular in 2013.

While ‘Coalition of One’ steps back into more acoustic territory, it keeps on the electronicised drum beats or its middle-third crescendo, creating a sense of continuity with the track before even as this song returns to a simple, guitar-led arrangement. Robert Coles’ refrain, “There’s so many people, that feel the same way I do”, is haunting in its almost jovial sense of despair – at first seeming like a call to arms, only to transform into “There’s so many people, who feel let down like I do” in its final repetition. Closing track ‘Early Retirement’ opens with a hesitant, minor key piano accompaniment, as Coles’ voice strains and pleads above it, “Fortunately I have got enough to realise this is growing old. I’m worn down by it all”.  While the melancholic voice/piano combo has whiffs of Billy Joel about it, it’s a beautiful way to round off the EP.

The Gentle EP is released on 23rd February via The Smallest Label.