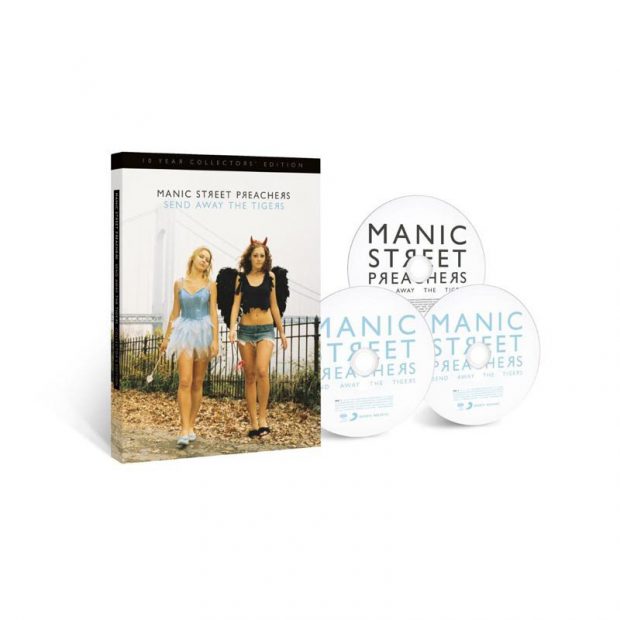 The boys from the Welsh valleys, Manic Street Preachers have given fans another treat in the form of a reissued version of seventh album ‘Send Away The Tigers’. Originally released in 2007, the album gave a new lease of life to the Welsh heroes after a slightly flagging (in their minds) ‘Lifeblood’. Returning after a brief hiatus for James and Nicky to persue solo careers, it is still hard to believe that it is 10 years since the classic ‘Your Love Alone Is Not Enough’ stormed the charts. On this revitalised version, we get a slightly amended tracklisting alongside multiple bonus features.

CD1 sees the whole of the original album alongside the demos for each song. Opening track, and title of the album, ‘Send Away The Tigers’ immediately announces how revitalised they were at this point. The guitar playing is as confident as ever, the rhythm is pounding along and the lyrics are sharp and bitter. Classic Manics. The next track on this edition is the amendment. On the original it was ‘Underdogs’, a slightly punk-pop track which was believed to be an ode to the fans, but on this version we get replaced by ‘Welcome To The Deadzone’. Originally a bside, it shows just how strong the Manics other songs can be. It is believed that at one point, the title of this track was originally the name for the album, hence a reason it has been upgraded in this instance.

A lot of the tracks on the album still sound refreshing and have held their stature. ‘Rendition’ and ‘Imperial Bodybags’ are still as relevant lyrically today than they ever have been. ‘The Second Great Depression’, ‘I’m Just A Patsy’ and ‘Winterlovers’ are still as lovely and the new mix has emphasised how beautiful the Manics can be. Originally, their cover of John Lennon’s ‘Working Class Hero’ was an unlisted bonus track, here it gets it’s own placing and completes the record as it once did.

However, the real gems come in the form of the demos. We get to hear the tracks in their rawest form, which includes ‘Underdogs’ from the original but not ‘Welcome To The Deadzone’. It’s a nice touch hearing James Dean Bradfield’s home cassette recordings where he is noting what chords the track is in and what fret the capo is on. It shows the dedication that the band put in to creating this record, you get the sense that this really needed to succeed. The 60’s spangly demo of ‘Your Love Alone Is Not Enough’ is sung entirely by James and sounds just as glorious as the single version. A testament to what could have been maybe.

CD2 is another box of delights. It amasses all of the demos and rare tracks recorded around the time which had been previously unavailable or released in limited quantities. It is a joy to have perfect quality versions of their one-off NME released cover of Rihanna’s ‘Umbrella’, their one-off charity track, ‘Leviathan’ and even the Christmas song ‘Ghosts of Christmas’ all in one place.

There are some stunning gems on this disk which rightly so deserve their place in the mainstream just as much as the album. The punky ‘Little Girl Lost’ is even more of hint towards their roots than ‘Rendition’ gives, ‘1404’ and ‘Morning Comrade’ show the Manics soft acoustic side off perfectly. ‘Fearless Punk Ballad’ is possibly the most un-manicy track in this collection, yet is so superbly different it is a hidden classic. It’s use of bells and lack of crunchy guitar single it out as a perfect experiment.

We are also given the joyous examples of Manic Street Preachers doing instrumentals in the forms of ‘You Know It’s Going To Hurt’ and ‘The Vorticists’. The latter being the personal favourite of the two. We are also blessed with Bass player Nicky Wire taking vocals on a couple of tracks; ‘The Long Goodbye’ and ‘Lady Lazarus’. Again, the latter in this instance sounds like it could quite happily have been a bonus track from his own illustrious solo record ‘I Killed The Zeitgeist’. The combination of Wire and Bradfield’s vocals on the chorus are heavenly. ‘Anorexic Rodin’ and the cover of the McCarthy classic ‘Red Sleeping Beauty’ again show the harder edge of the Manics.

Finally, the DVD houses footage of their complete Glastonbury 2007 performance which showcases a number of their hits including ‘You Love Us’, ‘Motorcycle Emptiness’, ‘You Stole The Sun From My Heart’ and ‘Faster’ alongside slices from SATT; ‘Imperial Bodybags’, ‘Autumnsong’ and ‘Your Love Alone Is Not Enough’ with special guest Nina Persson.

Also housed on the DVD are the videos for the singles, a small track by track guide and rather interestingly, multiple rehearsal and practice session footage which shows a unique and rare glimpse into the Manics world.

Overall this is a glorious boxset both audio and visually. The expanded artwork also shows off the delicate and intricate lyric sheets for the album tracks and bonus shots from the photography book ‘Monika Monster Future First Woman on Mars’ by Valerie Phillips from which the cover photo was taken from.

The Manics have again proved more than their worth in treating fans to an expanded and archived album presentation, but let’s hope that their next release comes in the form of something completely new as this is long overdue.