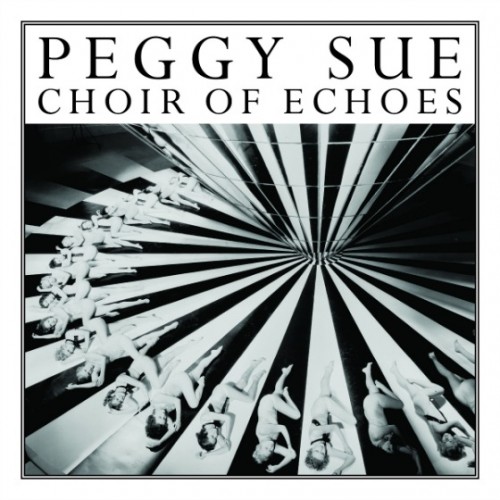 Channelling both rockabilly country and folk-rock, indie trio Peggy Sue will return with their third studio album, Choir of Echoes, on January 27th. The record is a follow up to their 2011 sophomore album, Acrobats. which saw the band evolve from an acoustic-driven folk group into a more confident, grunge-toned rock trio whose sound was clearly influenced by bands like Sonic Youth and The Breeders. They warn, “Although it has more songs than the new Justin Timberlake album, we must confess it is not as long in duration. Regardless we think you’ll still like it a lot.”

Choir of Echoes sees them carefully choose and refine the best elements of their previous releases, from the delicate folk harmonies of Fossils and Other Phantoms (2010), to Acrobats’ rock-motivated fretwork. The band keeps the rumbling electric guitars this time around, but drops the distortion to produce a purer sound, illustrated by a graceful clash of percussion and delicate clean guitar layers. It’s the band’s cleanest sounding record to date, with a wintery blues theme. Most of the songs on the album are harmony-layered, folk-rock tunes, however Peggy Sue pull out their rockabilly country-blues roots in tracks like ‘How Heavy the Quiet that Grew Between your Mouth and Mine,’ and ‘Longest Day of the Year Blues.’

The title of the album is explored in the first track, ‘Come Back Around,’ which introduces the record with the choir-like echoing of band members Rosa and Katys’ voices. The band says that “Choir of Echoes is an album about singing. About losing your voice and finding it again, voices keeping each other company and voices competing for space –the call and response of the kindest and the cruellest words. Choruses. Duets. Whispers and shouts.” The record’s featured single, ‘Idle,’ is a beautiful self-loathing indie track, warmed by Katy’s Zooey Deschanel-esque tone. “’Idle’ is a song about being unemployed and incurably thoughtful. The opening and closing parts are a kind of troubled gospel song — a prayer for purpose in the knowledge that the purpose will probably not be a ‘good’ one,” they explain. “It’s about impatience and distractions and thinking about things too much. And of course it’s about a boy.”

With both upbeat and more relaxed songs, Choir of Echoes produces a broad variety of indie folk tracks. It is a mature record which showcases a clear progression in the band’s sound, and when viewed in conjunction with their previous work, it’s exciting to hear which elements have been retained along the way.

Choir of Echoes is out on January 27th via Wichita Recordings.