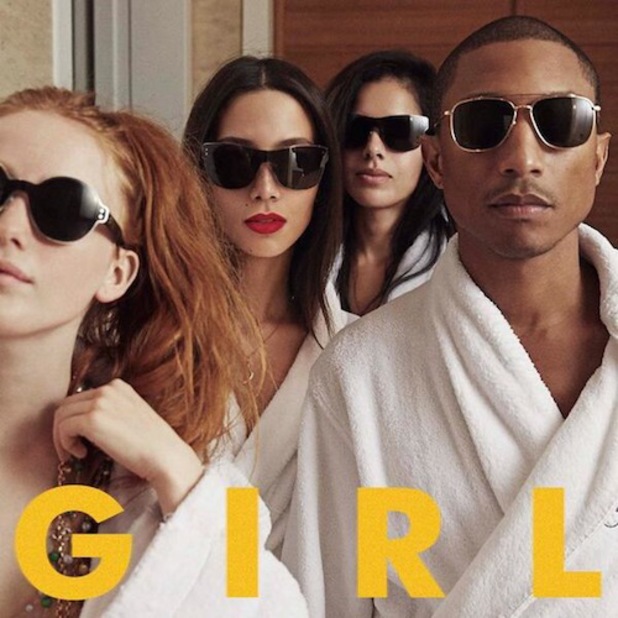 Ex-NERD man PHARRELL WILLIAMS had quite an impressive 2013; featuring on the top three tracks of the year, Daft Punks ‘Get Lucky’, Robin Thicke ‘Blurred Lines’ and his own track ‘Happy’ from the Despicable Me 2 soundtrack. Now, with his first album since his 2006’s debut In My Mind the superstar is set to release G I R L.

The album is in no short supply of high profile guests; the album opener ‘Marilyn Monroe’ sets the tone with Kelly Osbourne. The subtle string sections, which were arranged by Hanz Zimmer (most notable for high profile film soundtracks The Lion King and Gladiator) are delicately the backbone of the track. The album also features the likes of Justin Timberlake (on the catchy ‘Brand New’) or ‘Get Lucky collaborators Daft Punk appearing on ‘Gust of Wind’.

The album is mainly built around ‘Happy’; the infectiously upbeat track is perfectly situated on the album, of which loses it way slightly on ‘Hunter’ and ‘Gush’. Yet Pharrells soft, soulful voice never gets tiring and ‘Happy’ is one of the stand out tracks of 2013/2014. The collaboration with Miley Cyrus is also a surprise, the track ‘Come Get It Bae’ is a sure to be ‘top-of-the-charts’ hit; it has the same infection of the Despicable Me track. However, as a whole the album does fall slightly flat, with songs being more about the collaboration of the high-profile artist and not entirely about the music.

Now branded as one of the worlds major superstars, Pharrell Williams has released a very strong album with G I R L. Falling into a genre which is notorious for repetition, G I R L is a diverse piece of pop. It certainly isn’t the most commercial album musically, perhaps the guests suggest otherwise – however this upbeat release is well worth a couple of plays.