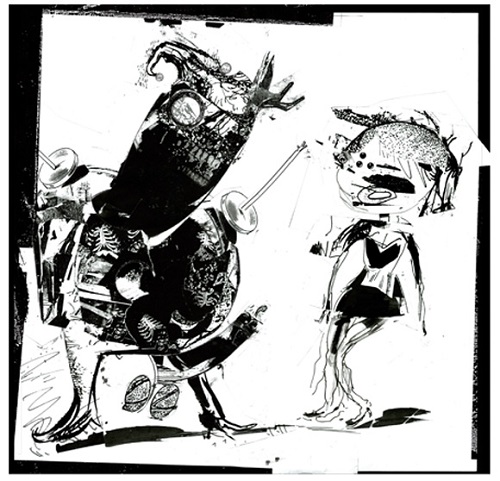 Boston alt-rockers Pixies have released a brand new four-track EP, the imaginatively-titled EP1. Despite having reformed a decade ago, EP1 marks their first official multi-track release in over twenty years.

Gone is the chaotic, surreal haze that shrouded the likes of ‘Monkey Gone to Heaven’ and ‘Where is My Mind?’ Instead their sound has, for the most part, mellowed considerably. Opener ‘Andro Queen’ is almost middle-of-the road by comparison, with its traditional chord progressions and unchanging rhythms. ‘Another Toe in the Water’ is similar, catchy and emotive in its own way, but lacking the aural confusion and lyrical freedom that made Pixies so distinctive, and such an inspiration long after their initial split.

There are flashes of Frank Black’s biting yet surreal cynicsm on ‘Indie Cindy’, the verses of which feel much closer to the almost spoken-word spontaneity that imbued such frenetic passion in songs like ‘Debaser’. However, it too fades into another, fairly generic rock-ballad chorus whose melodic nature isn’t contrasting enough to really pack a punch. Only on closer ‘What Goes Boom’ do the band finally recapture some of their unique, raw energy, the chugging guitar riffs, powerful rhythm section and and verse-chorus contrasts in vocal tone  reminding us exactly why they were so brilliant in the first place.

It’s by no means a classic Pixies release, but perhaps that’s simply a sign that Pixies, as they once were, have been for the most part consigned to the past. Twenty years on, it would be naive to expect that the band would want to, never mind be able to, sound exactly the same as they did a generation ago, especially with the departure of long-time bassist and vocalist Kim Deal. Whatever the reality, EP1 does enough to whet the appetite for a full length release.

Who that will involve on bass duty, however, is anybody’s guess.