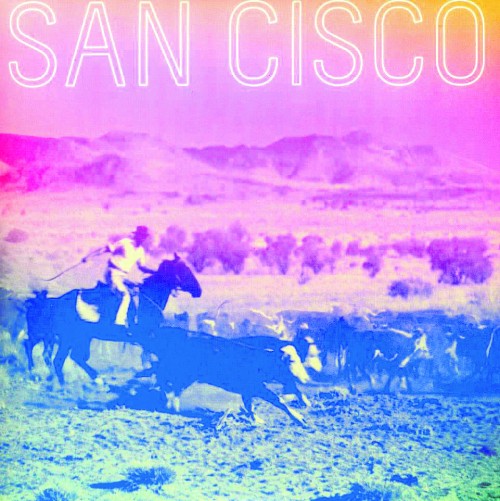 That San Cisco hail from a country that experiences over 3000 hours of sunshine every year will perhaps come as no surprise. One listen to their effervescent debut, and it’s easy to forget that you live in a country that experiences, on average, about 3*. San Cisco is exactly the kind of sun-soaked indie-pop that washes those disappointments away, infusing you with nostalgia for summer love and teenage heartbreak that proves far more enjoyable than our own, rather more drizzly, reality.

Opener and upcoming single ‘Beach’ throws the listener straight in at the deep end, as Jordi Davieson’s reverberating vocals float hazily on a sea of 80’s-style synthesisers. Combined, this creates a sense of weightlessness that perfectly mirrors the single’s theme of distance, the basic inability to truly understand the person you’re with. Lines like “I made a mixtape, with all the songs that you hate” are typical, the naïve sense of loss and retro sound making it something akin to the soundtrack of a John Hughes movie.

This calm, electro-tinged sound soon gives way to a pacier, more upbeat indie fare. Tracks like ‘Fred Astaire’, ‘No Friends’ and previous single ‘Awkward’ deliver exactly the sort of danceable, off-kilter guitar work guaranteed to get more toes tapping than a sell-out crowd at a restless leg convention. It’s this catchy, unashamed indie ebullience that has already seen ‘Awkward’ clock up over four million Youtube hits, as well as attracting critical acclaim from the likes of NME and Radio 1. Fortunately, this kind of energy is contagious, diffusing into much of the rest of the album.

While their indie sensibility is never far from the surface, one of the most satisfying things about San Cisco is the amount of variation it manages to squeeze in, even within a single genre. San Cisco’s sound draws obvious comparisons to bands like Vampire Weekend, whose influence they readily acknowledge. However, on tracks like ‘Mission Failed’ they veer towards the pessimistic electro-pop of Metric, on ‘Lyall’ indulging in a quasi-surf rock feel. Rather than indicating a lack of direction, this willingness to experiment is more reflective of a band who are still exploring the reaches of their creative potential. All in all, it makes for a rather exciting listen.

With this being only their first full-length release, it’s clear that there are bigger and better things to come from San Cisco. Nonetheless, they’ve managed to set the bar pretty high. San Cisco is frenetic while carefully controlled, energetic without being exhausting. They’ll be a long way from their home town of Freemantle when they touch down in the UK this October, but on the strength of this self- assured debut, they deserve a welcome as warm as the shores they’ve left behind.