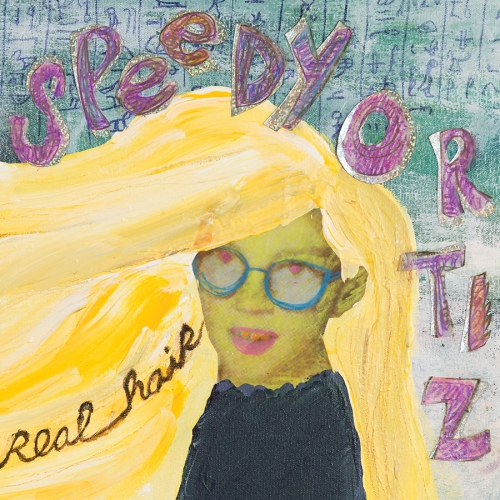 Massachusetts garage-rock quartet Speedy Ortiz may only have released their debut LP back in July 2013, but they’ve already won the hearts and minds of fans and critics alike with their unique combination of abrasive, garage-rock aesthetics, and underlying melodic power. Originally a solo side-project set up by front woman Sadie Dupuis, it expanded to include the musical talents of Mike Falcone, Darl Ferm and Matt Robidoux, and the rest, as they say, is history. Seven months down the line, and their new EP, the wonderfully titled Real Hair, is about to hit the shelves.

While they are a band capable of writing at the gentler end of the musical spectrum (for instance Major Arcana’s sublimely beautiful ‘No Below’), Real Hair is an all-out, lo-fi rock assault. With the distortion turned up to 11, the listener is hit with a wall of noise that barely abates throughout its 13 minute run-time. While this can at first feel overwhelming, it only takes a few listens to realize how brilliantly each track has been crafted.

Opener ‘American Horror’ is a mess of thrashing chords, pounding rhythms and relentless guitar riffing. It’s occasional, deliberate off-key notes add to the unnerving, chaotic atmosphere that the unpredictable rhythm changes create. Dupuis’s vocals provide the anchor, her abstract lyricism matched by a perfect rock melody, of the kind that Weezer used to such good effect in their earlier work.

It’s a template that works well across the rest of the EP. ‘Oxygal’ is a brilliant combination of fluid lead guitar work and atypical melodic progressions, reminiscent of Incubus at their best. Final track ‘Shine Theory’ is more like a brilliant chart topper, hidden beneath layers of lo-fi instrumentation and bad attitude. Swap its discordant guitar solos and scuzzed-out rhythm section for a few keyboards and a horn solo, and you’d have a pop song so infectious even Sheldon Cooper wouldn’t mind catching it.

The comparisons come thick and fast as far as Speed Ortiz are concerned, with Pavement, Sebadoh and Liz Phair often being cited as the main culprits. While the influence those artists have had is clear, it’s the loose, character-filled performances and bluntly brilliant lyricism Speedy Ortiz bring to the table that makes them feel like the first in a new breed, rather than the last of the old. Real Hair is simply more proof of their importance in the music scene right now. A bloody brilliant listen.

Real Hair is released on February 10th via Carpark Records.