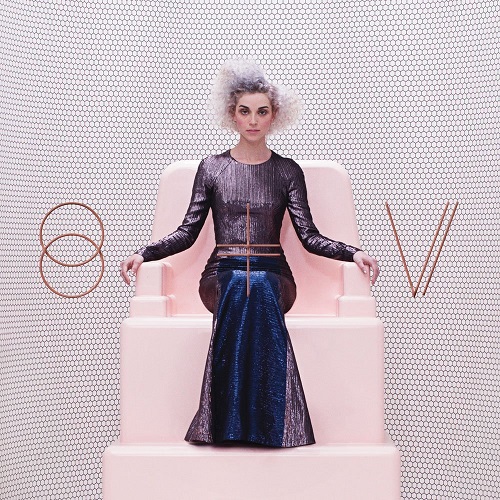 It doesn’t seem too long since St. Vincent (Annie Erin Clark) released Strange Mercy, her critically acclaimed third album. While it gained almost universal praise back in 2011, Clark was quoted at the time as saying “I don’t think it’s the best record I’ll ever make, but I think it’s a good record,” self-depreciating and at the same time inviting high expectations for the inevitable follow-up. St. Vincent, released on February 25th, is that follow-up, and it certainly doesn’t disappoint.

Clark, a former member of Polyphonic Spree and once part of Sufjan Stevens’ touring band, is no stranger to eclectic musical arrangements,  amelodic progressions and downright musical weirdness, so it’s no surprise that opening track ‘Rattlesnakes’ begins with a combination of post-punk electronic riffs and staccato vocal lines. Building layer by layer, it instantly brings to mind the surreal, digitized musings of Stevens’ Age of Ads. ‘Birth in Reverse’ is punkier still, its syncopated beats and jagged, warped chords giving a Strokes-esque, chaotic edge perfectly suited to Clark’s melodic yelping.

The pace slows for ‘Prince Johnny’, whose choral accompaniment and soulful melodies are laid out against a background of smooth electronic beats. “All your friends and acolytes holding court in bathroom stalls, where you pray to all to make you a real boy” she sings in the song’s hauntingly beautiful chorus, evoking Annie Lennox at her most ethereal.

It’s not just on this track that St Vincent draws upon that instantly recognizable, 80s blend of powerful vocals and heavily electronicised backing. ‘I Prefer Your Love’ could have pulled its opening synths straight from a Eurythmics power ballad, but its trip-hop beats and jarringly controversial lyrical embellishments (how’s “I prefer your love to Jesus” for an opening line?) ensure that it feels anything but derivative.

It’s hard to explain just how diverse the influences are that Clark draws upon for this album; ‘Huey Newton’ brings the old-school hip-hop beats; ‘Digital Witness’ taps into the rhythms and sounds of electro-swing; ‘Bring Me Your Loves’ combines Alt-J’s surreal lyricism and ear for a rhythm with marching beats and pitch-bending synths. There’s such consistency of vision, however, that all of these myriad influences compliment rather than compete with one another, and that fact is testament to Clark’s unparalleled ability as a songwriter.

For those who are already familiar with the quality of St. Vincent’ back catalogue, that St. Vincent is as brilliant as it is will come as no surprise. For anyone who’s not yet been introduced to her weird and wonderful world, this album will serve as a mind-boggling introduction. Bending her voice, her instruments, even entire genres to fit with her vision, Clark has created an album that it’s impossible to simply listen to. ‘Experience’ would be a far more fitting word.

St. Vincent is released on February 25th via Caroline.