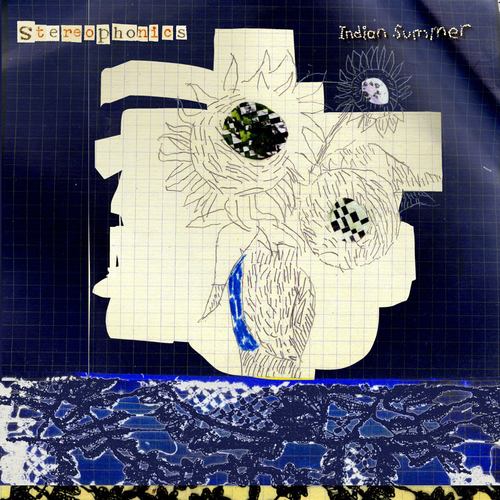 Stereophonics have been very quiet for the last couple of years, now in the space of 3 months, we’ve had 3 new tracks off them, a mini tour before christmas, and now the announcement of a new album and further live dates. I don’t know, “you wait all day for a bus…”

‘Indian Summer’ however, is the first single proper to be released from the forthcoming album ‘Graffiti On The Train’. There’s something different about this release though. From the opening notes through to the final cymbal crash, it is distinctly ‘phonics, yet somehow different. There is a strong emphasis on piano and orchestra on this song. Kelly Jones’ vocals are very strong but guitar playing is minimal. There is a very summery feel to the song, and in the second half of the track, the backing vocals really lift it further despite it swinging along at a casual pace.

I get the impression that Jones and company have needed the two year break from the public limelight, they sound completely revitalised and it suits them. I cannot describe this “new” sound they have. It works really well on ‘Indian Summer’, the previous tracks; ‘Violins and Tambourines’ was very dark and brooding, yet very exciting, ‘In A Moment’ followed on from that by creating a moody atmosphere. This isn’t as dark, it is very positive in comparison, think of a happier ‘It Means Nothing’ and you’re getting the hint. Positive lyrics and a nice summery slide guitar pull this track together. A very confident return from the mighty Stereophonics.