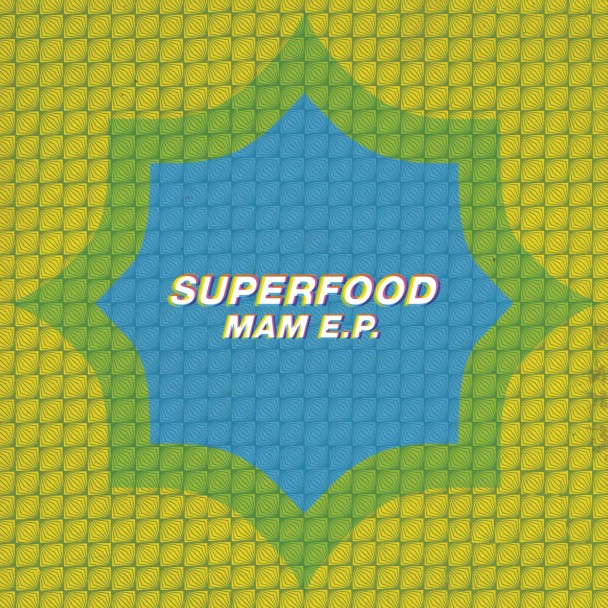 Brummie grunge/punk four-piece Superfood have built up an enormously supportive fan base through touring alongside bands like Peace and Swim Deep.  Their new four-track EP MAM features previous AA-Side singles ‘Bubbles’ and ‘Melting’, as well as ‘TV’ which was released as a single in January. The final track, ‘Houses On The Plain,’ was recently unveiled online, but won’t be available to purchase until the full EP drops. Despite the slacker college brit-pop vibes, MAM finds the perfect balance between scuzzy lo-fi and clean, catchy melodies.

Opening track, ‘TV’ has already been praised for its lyrical simplicity and catchy melodies. “I can never sleep without the TV on” Dom sings, before melancholically questioning, “who turned off the TV?” (Probably whoever pays the electric bill).   Later on in the EP, ‘Melting’ proves to be a roller-coaster ride of a track, with quiet, simple valleys which ascend into angry percussive crests and then back around again in an unexpected rise and fall. Both tracks follow in the same vein, creating a fuzzier, rough-around-the-edges atmosphere. Guitarist and vocalist Dom Ganderton describes ‘Bubbles’, meanwhile, as “a discordant, vile, beautiful mess about people not having anything important to say but saying something for the sake of it.” Given that we’ve already reviewed ‘Bubbles’, we’ll not join them.

The final track on the EP, ‘Houses On The Plain’ reaches out with a softer touch. Ryan Malcolm’s fretwork layers over Emily Baker’s steady bass while she stands in the back, looking like the long lost fourth sister of Haim. While ‘Houses On The Plain’ is a lot less in your face than it’s three supporting tracks, it picks up the pace halfway through, and is guaranteed to have you nodding along.

As a debut EP, MAM delivers four solid tracks, which serve as tasty appetizers for what Superfood could unleash in the future. It’s happy, playful, and angsty in all the right places.

MAM will be released through Infectious Music UK  on 3 March.