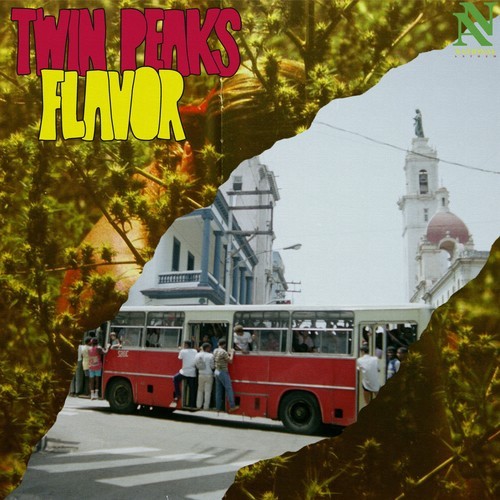 When you think Twin Peaks, it’s probably David Lynch’s brilliantly weird TV show of the same name that springs to mind. However, the Chicago natives and hotly-tipped ‘heavy pop’ outfit now operating under that same moniker, may just have something to say about it. Their new Flavor EP, out in the UK on July 7th, gives a delicious taste of what lies ahead.

Opening with the gloriously scuzzy (yet irrepressibly sunny) title track, the band’s youth, energy and ballsy optimism have you hooked before the first chorus has even rolled around. The beats are infectious, the guitar licks add a dash of rock’n’roll to the dream pop sound that dominates. The melody begs to be screamed/shouted along to, preferably in a festival field, cider in hand, and the lyrics’ abstract references to living life to the fullest are perfect summer anthem material.

‘Stand in the Sand’ develops upon its bouncing bass line, throwing in some crashing cymbals and overdriven chords to continue the first track’s scuzz-pop vibe. However, this time the instruments are given more opportunity to shine, with a brief guitar solo making its way in between choruses, and a final breakdown taking things on an even more psychedelic tangent.

With ‘Irene’ comes a change of pace, the tempo slowing and the bass drum beats providing a nice contrast with the clean, reverberating guitars that now enter the mix. The vocals are clearer, crisper, but still with a slight echo that adds an other-worldly quality. However, as closer ‘Boomers’ comes around, it’s this tripped-out, psychedelic feeling that takes over. The riffs are slowed down, as are the beats, but the scuzzy textures return to add a harder edge to the track’s instrumental moments. Clocking in at 3:16, ‘Boomers’ is the longest track on the EP by some way, and its weird breakdowns and general spacey-ness make it an ideal closer to what has been an unfortunately brief introduction to the Twin Peaks sound.

Their next full-length album, Wild Onion, isn’t due out until later in the year, but until then, the Flavor EP makes for a brilliant starter. Psychedelic weird-pop bliss.

The Flavor EP is out on July 7th via National Anthem.