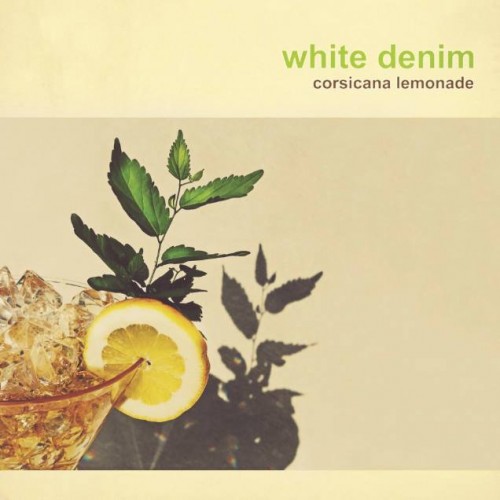 From the moment James Petralli’s vocals enter over a backing of reverberating guitar, it’s clear the Corsicana Lemonade is going to be every inch the rock’n’roll record you’d expect from Austin rock stalwarts White Denim. Since releasing their début album way back in 2008, the band have matured into one of the most well-respected, and most prolific, members of the rock’n’roll revival.

Corsicana Lemonade is a confident, sweltering behemoth that strolls magnificently through the tropes and clichés of the genre, tossing them aside or transforming them into something brand new. It is every inch a  modern album, but at the same time is instantly reminiscent of the classic rock sounds of the 70s and 80s. James Petralli’s vocals preside over all, capturing the sensual swagger of Jimi Hendrix in opener ‘Let It Feel Good (My Eagles)’, or channelling the laid-back rock of The Steve Milller Band on ‘New Blue Feeling’. Instead of simply mimicking the styles of others, however, White Lemonade flip conventions on their heads. Rather than the moderately upbeat, major-key anthem that a song like ‘The Joker’ might inspire, they instead opt for a seemingly pessimistic opening in the latter, with downbeat vocals and subtly melancholic guitar riffs that build towards the kind of melodic, distorted riffing that bands like The Who couldn’t have done any better.

Indeed, much of the album is dominated by guitarist Austin Jenkins, whose stunning fretwork gives many of these tracks a scuzzier, more fragmentary edge. The disjointed rhythms that begin ‘Distant Relative Salute’, for instance, seize the listener by the ear, as does the soaring solo in which the song culminates. ‘Pretty Green’, the only single released from the album to date, is another stand-out track, the chugging power chords and driving rhythm section provided by Steven Terebecki and Joshua Block making this easily one of the catchiest rock songs of 2013. Petralli’s blues-infused voice is perfectly matched to the organised chaos of the instruments that slowly build around it.  “Well it took me several mornings, with my throat in a mangled knot, sounding out my virtues, and my vices and other thoughts,” one of many lyrical juxtapositions which reflect the clashes between optimism and pessimism, rock’n’roll traditions and modern sounds, typical of this conflicted yet unified album.

If the past couple of years have seen this kind of southern rock slowly creep back into style, then it’s fair to say that White Denim are in a large part responsible. Easily one of the most relentlessly creative groups out there right now, in Corsicana Lemonade they prove yet again that they are the masters of storming, unclichéd rock’n’roll. While they often wear their myriad influences on their sleeves, they never submit to simply aping the achievements of their predecessors. Instead, they seize control and wrestle with those sounds until they have once again created something fresh and inspiring. Bring on the next LP.