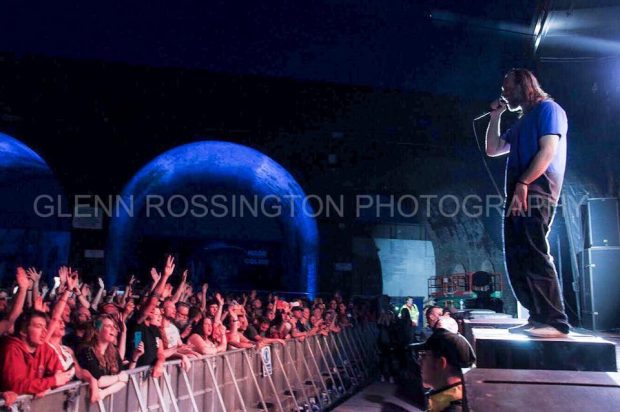 When someone had the idea to put a tour together featuring three of the biggest indie-rock bands of the 1990’s, some may have said that it was an idea set to fail. However, ticket sales and the fanbase following each of the acts said otherwise. Add in to the equation that the line up would rotate each night allowing for a different headline act, and the addition of Dodgy as a support act and you have yourself a unique touring one day festival.

Playing at Birmingham’s newest venue, the revamped former Rainbow Courtyard now under the name of Digbeth Arena, this was the show to kickstart a summer of live events.

With Birmingham’s own Dodgy stepping up first, they are greeted warmly by a still arriving but decent sized crowd and provide a hit-packed30-minute set. ‘You Give Drugs A Bad Name’ opens the show followed swiftly by the hits ‘In A Room’ and ‘Staying Out For The Summer’. Over the duration of the set, the Birmingham leg sees the first of many loud sing-a-longs of the night from the joyous crowd.

Terrorvision are the first of the main acts to play. Tony Wright leads his bandmates through an hour of anthems, ‘Discotheque Wreck’, ‘Alice, What’s The Matter?’, ‘Perseverance’, ‘Josephine’ and ‘Oblivion’ of course bring the biggest reactions as the band play through an effortless set. After a quick change over, Ginger Wildheart and his band The Wildhearts arrive to a mountain of noise and chaos. Launching straight in to ‘I Wanna Go Where The People Go’, the highlights keep coming; ‘Suckerpunch’, ‘Vanilla Radio’ and ’29x The Pain’. By the time the closing number ‘Love U ’til I Don’t’ kicks in, the sun is setting, the beer is flowing and the audience and moshpits have swollen to their full capacity.

After a tense 30 minute break, tonight’s headliners Reef arrive onstage arms aloft as the audience cheer on to welcome the West Country Rockers. Having released their first studio album in 18 years only the day before, it’s fitting that they are closing the days’ events. ‘Higher Vibration’ opens the set with it’s heavy basslines and their legendary casual swagger. ‘Place Your Hands’ is surprisingly early in the set followed closely by ‘Stone For Your Love’. The set seems to be a little subdued as the first half feels a bit slow. ‘Consideration’ and ‘First Mistake’ and the country-tinged ‘My Sweet Love’ are just enough to allow us to catch our breath before the show gets ramped up to full carnage mode.

‘I Would Have Left You’ and ‘Come Back Brighter’ lift the pace and feels like a party of monumental proportions. New track ‘Precious Metal’ is a beast, ‘Don’t You Like It?’ sees the arena shake to the thunderous bass riff provided by Jack Bessant. Frontman Gary Stringer’s vocals are insanely brilliant as he shifts from rock to country, gospel back to rock with ease. New guitarist Jesse Wood shines bright as the riffs to ‘Naked’ and ‘Yer Old’ kick in. Dominic Greensmith’s drumming closed the night as he, Jack and Jesse join together for a rollicking version of ‘End’.

Britrock must be destroyed? No! Based on the popularity of the gig and the strength of all performances tonight, Britrock must certainly be embraced!