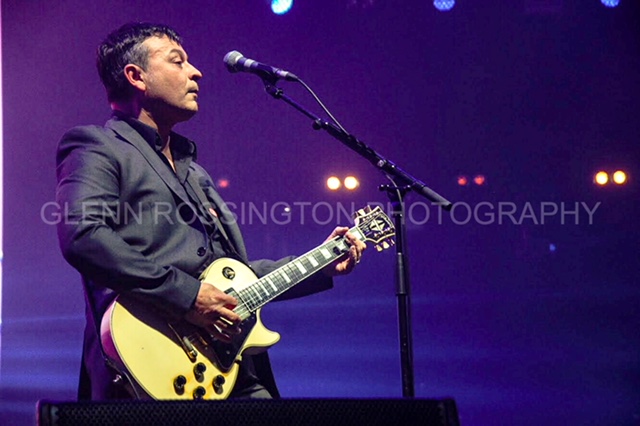 After releasing their 13th studio album ‘Resistance Is Futile’, their first in 4 years, Manic Street Preachers returned to Arena Birmingham to play a celebratory set of hits, new favourites and even a couple of rarities.

On support duty were Liverpool’s finest ambassadors The Coral. Warming the audience up, they played a sublime 45-minute set made up of the hits; ‘Bill McCai’, ‘Pass It On’, ‘In The Morning’ and ‘Dreaming of You’. There was even time to throw in the brilliant new single ‘Sweet Release’ before making way for tonights’ main attraction.

As the clock struck 8:45pm, the house lights dipped and the audience were presented with a video introduction made up of a female Samurai Warrior, keeping in line with the albums’ artwork, mixed with their trademark slogans. James, Nicky and Sean arrive in the shadows and launch straight in to a blistering rendition of ‘International Blue’. With James spinning around on one foot whilst soloing, Nicky doing his stylish jumps and Sean beating away, this is clearly a revitalised band.

Joining the band on stage tonight are longtime touring companions Nick Naysmith (Keyboards) and Wayne Murray (Guitars), with the addition of Gavin Fitzjohn on Guitars and Saxophone who adds a further element to the overall sound throughout the set. The classics sound beefier and energetic.

Whilst the main element tonight is focussed on ‘Resistance Is Futile’, it is represented by performances of ‘Dylan & Caitlin’, ‘Distant Colours’, ‘People Give In’ and new single ‘Hold Me Like A Heaven’. Of course, there is also a multitude of hits too; ‘You Stole The Sun From My Heart’, ‘Kevin Carter’, ‘Motorcycle Emptiness’, ‘You Love Us’ and ‘If You Tolerate This Your Children Will Be Next’. We even get a version of a lost b-side instrumental in the form of ‘Horses Under Starlight’ which is gloriously jazzy, alongside the rarely played ‘4 Ever Delayed’ and ‘There By The Grace of God’.

James is in a chatty mood tonight, claiming that off the top of his head this is the 20th time the band have played in Birmingham throughout their career. He also jokes with the audience by asking “How many people here have a copy of The Greatest Showman?” – the album that denied them their first number one album in 20 years.

During the traditional mid set acoustic spot, James plays an energetic solo version of ‘Faster’ which delights the audience. He jokes about turning 50 next year before launching into an acoustic ‘From Despair To Where’ The room surprises him by singing the lead guitar line. As the song finishes he even throws in a few lines from Bonnie Tyler’s ‘Total Eclipse of The Heart’.

With the rest of the band rejoining, the remaining songs of the set are played with just as much velocity as the first half. ‘You Love Us’ sounds spiteful, ‘Walk Me To The Bridge’ echoes around the arena, and ‘Slash ‘n’ Burn’ sounds as punky as it did 17 years ago.

The final song of tonight is ‘A Design For Life’. As the song progresses, a shower of confetti and streamers explode over the standing audience and the whole room comes to life as everyone sings a long in complete unison. A welcome return from one of Wales’ finest bands. With a performance like this, they need not worry about turning 50, there is a lot of life left in this dragon.