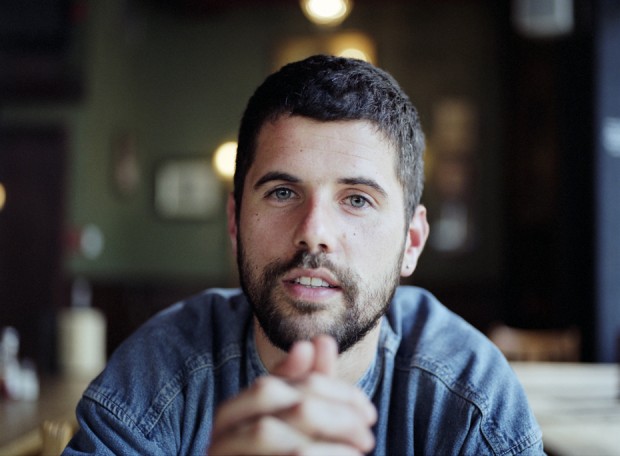 Portico Quartet’s former Hang Drum player, Nick Mulvey, is preparing to release his debut solo album, First Mind, in May. Currently on a UK tour, he sat down with us while munching on trail mix (before heading onto the stage in Edinburgh) to speak about instinct, writing music, and how a leg injury inspired him.

First Mind, currently set for a May 12th release, follows on from several EPs and singles. “It was funny because it happened very quickly and intensely in September, a little bit into October, but we just got the bulk of it done in a very short time –in like 2 weeks,” Nick says of the experience of putting the album together.

“I mean, it was over the month but the first two weeks we just got a lot done. I had been building up for it for a long time… when I get to the studio it’s the first bit of recording I’ve done since whenever the last time was. So, on one level it was very, very quick; on another level, another way of looking at it, I spent 2 years doing this record. It’s been my total focus since I left Portico Quartet, and it felt definitive. When we got in there finally in September with Dan Care – that was the closest thing, with the producer Dan Carey, who very quickly became like an old friend – we really clicked and had an amazing time.”

The title of the album, First Mind, means instinct –a concept that has been a driving force behind Mulvey’s music. “The way I write, and indeed the way I operate the studio is… it’s not too cerebral I don’t think. It’s about doing and much more being in the body, and it’s instinct that really is at play. And so, I started to sing about that specifically –not just use it as the operating thing– but I started to put my focus on it. ‘What is the intelligence with which one is to write music?’ Then, I wrote a song called ‘First Mind,’ and then it occurred that that would be a really good umbrella for the whole album, because if there is one thing that links all the songs it’s the process by which they come, which is the first mind.”

Mulvey claims that the idea of instinct being such an important factor in music writing was brought to his attention primarily by studying his body’s natural response to an injury; “I came off the back of a Moped, and I had quite an injury on my leg. There was a while of healing under the scab, and I just watched the scab for ages –and maybe I’m just a weirdo –but it was an interesting experience on day one of the scab, it was very interesting by day two, and by day three it was a full-on religious experience. I was like, completely amazed by the most basic and obvious thing about that scab, and it occurred to me eventually, to cut a long story short, that my aim is always to write music with the same intelligence that the scab was growing, which was instinct.”

His most recent single ‘Cucurucu’ was released on 3 March, and while the word Cucurucu is technically a nonsensical word that Mulvey made up, it is closely related to the Spanish onomatopoeia for the sound of birds. The song is an adaptation of a poem by D.H. Lawrence called ‘Piano,’ Mulvey explains. “ [It’s] a poem I’ve loved for a long, long time, one I had posted on my pin board for years, and I always thought right away from the first time I read it, I thought that would make a good song. And I had to wait until I wrote a chord sequence and a strumming sequence to scan with the rhythm of the words. Eventually I did, and then in the process of putting that poem down to the music, you know D.H. Lawrence says –not that I felt his poem could be improved upon, I want to be clear about that. It’s beyond…if there if a beyond perfection it’s there –but, he says about the kid underneath the piano and the mother who smiles at the kid as she sings, full stop. And I thought ‘wouldn’t it be cool that was a colon, and she smiles at him as she sings…what might the mother being singing?’ And I thought personally as an audience member, I’d love it if the singer took me into the song within the song, and put words and gave voice to what the character was singing.”

While using pre-existing text as inspiration for his music happens rarely, instinct once again plays a role in his song writing process. For Nick, the guitar patterns come naturally, and when a particular musical pattern stands out he begins to mumble words and musical sounds. “It’s all about letting the subconscious bubble up,” he explains, “and that’s why whenever I think about what I should write or what songs the world needs, it’s never as entertaining, for me, as what I discover when I let it bubble up.”

This process of letting his subconscious take the lead in creating music was most apparent when writing one of his first singles, ‘Fever to the Form.’ The duality of the double F sound left an impact on Mulvey who examined the idea further. “Often I find that when they really bubble up uninterrupted from my subconscious they do have a duality. There normally is a kind of double bind; fever being the chaos of life, and form being the order of music. Fever to the form; it’s like a commitment to understanding my life through the process of music.”

While most of Nick Mulvey’s music focuses on his acoustic guitar paired with his voice, the record features instruments like synths, percussion, harmonium, piano, and chimes. “But the guitar is always the skeleton in the architecture; other instruments were always textual and embellishments,” he says, “for this record, I felt I needed to do that.”

As Mulvey continues to instinctively navigate through music in order to understand his life, the result is a beautifully crafted album. First Mind releases on 12 May.