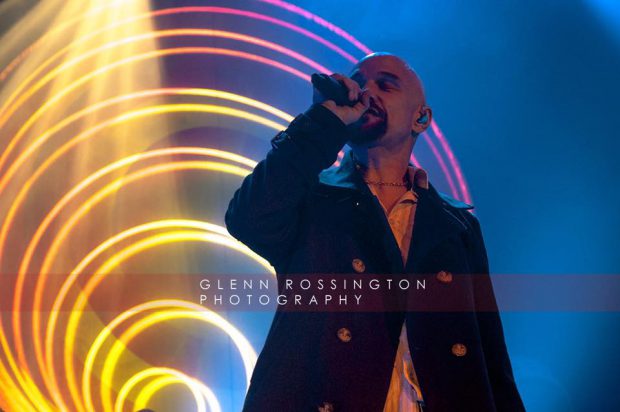 Rounding off a spectacular year following the release of latest album ‘Girl at the End of the World’, Manchester legends James announced a one-off show in Liverpool. In celebration of the popularity of that show, a couple of warm up dates were subsequently announced including a show in the Midlands at Wolverhampton’s Civic Hall.

Opening proceedings tonight to warm up the crowd was a short but sweet set from newcomers The Slow Readers Club. Bringing songs from their debut album ” the set included many highlights including ‘Cavalcade’, ‘Sirens’, ‘Block Out The Sun’ and ‘I Saw A Ghost’. Warming the crowd up perfectly, the venue was set for a night of joy.

Stepping on stage in Wolverhampton for the first time in 19 years (25 March 1997), the indie outfit have certainly changed since then. Frontman Tim Booth is now a youthful 56 and bounds around the stage like a man half his age. They kick off the show with a classic from the album ‘Whiplash’ in the form of the fun ‘Waltzing Along’ then heading straight in to the new with ‘To My Surprise’. ‘Waltzing Along’ sees Booth bring out his unique dancing style which warms the crowd up with adoration.

One of the highlights for the casual viewer tonight is to see how the new material sits alongside the older classics. With ‘Girl at the End of the World’ being held off the number one spot by Adele, it’s safe to say that this has been a great year for James’ revival. Songs like ‘Attention’, ‘Feet of Clay’ and ‘Dear John’ receive as much of a reaction from the jubilant audience as the older songs.

However, it is the older tracks that most of the wide mix of audience members are here to see. From the older generation who have grown up with the band, through to the younger generation who have been influenced both by their parents and the likes of indie discos and radio stations across the country, a warm reception is received for the likes of; ‘Ring The Bells’, ‘Interrogation’ and ‘Been Burned’.

Midway through the set, Tim Booth comes back down in to the front rows as the band launch in to a lively rendition of ‘Born of Frustration’. Drawn out in to an 8-minute epic, the song see’s Booth launch himself into the arms of the crowd and crowdsurfs expertly towards the middle of the venue whilst not losing a breath and keeping the song note perfect. Returning to the stage, they run through a couple of number which includes a moment where trumpeter Andy Diagram appears on the balcony amongst the seated crowds.

In the final third, a couple of chairs are brought out as the mood drops for a semi-acoustic rendition of ‘Whiplash’ classic ‘She’s A Star’ which sees the entire audience up on their feet singing along to the popular classic. We then get a ride back to 1989 with a “madchester” heavy sounding ‘Come Home’ which again sees Tim standing aloft on the security barrier in the front rows.

Another highlight is a rare performance of their festival friendly hit ‘Sit Down’. To the band, this must be their version of Radiohead’s ‘Creep’ in the respect that they are not fond of playing this track on a regular basis. Tonight we get a slightly alternative version, beginning softly and acoustic and building up in a slow-burning style to the full on feel-good version we all know. Needless to say this is another winner with the audience tonight. The set closes on a lively rendition of ‘Attention’ and as the final notes fade out, the audience are eating out of the palm of their hands begging for an encore.

Returning after a few moments, the band begin with another classic ‘Just Like Fred Astaire’. Tim decides at this point to go venturing through the crowd again, but this time appearing himself on the balcony and working his way from one side of the venue through to the other.

The show is completed tonight with ‘Sometimes’ and finally a song from the new album ‘Nothing But Love’. This in particular gains one of the biggest reactions of the night and sees the auditorium lit up fully with both the band and the crowd uniting in vocals spreading the love and warmth that the lyrics bring to the fore.

Before leaving the stage, Tim announces that they will return soon to Wolverhampton, let’s hope it’s not another 19 years before that moment arrives.