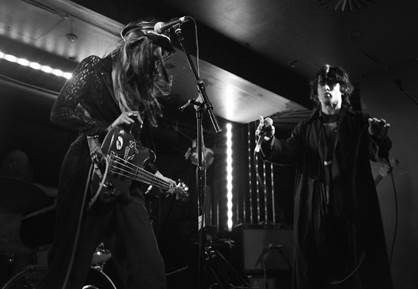 New single ‘Beast’, out today (December 9th) via Tape Records, is a full-throttle call-to-arms. This powerful and confrontational anthem fuzzes and spits while frontman Nima approximates a swaggering demigod as if Geddy Lee was howling into a maelstrom kicked up by Sleep. At other moments the mix of mayhem and heaviness brings to mind the likes of Harry Pussy and Black Sabbath playing at the same time.

Of the new video, Nima says:
[quote style=’1′ cite=”]“The footage is from an old 70’s recording of an Iranian Dervish dancing around the desert in his stone garden. We fell in love with this guy. It was amazing watching how his mystic dance went so perfectly alongside this music, each section almost perfectly choreographed, across the decades in a way he would never have known. If we were getting deep we could talk about connections thru time and space, and the one-ness of it all. But we won’t. It’s just a video man.”[/quote]

A precursor to their anticipated second LP, ‘PRODUCT’, ‘Beast’ was produced by Mikko Gordon (Thom Yorke, Gaz Combes), in the studio he built himself at Goldsmiths University, and mastered by Bob Weston of Shellac.

‘Beast’ is a song built for speed. Its anthemic forward march is a sensibility that runs counter to the over-stuffed, of-the-moment world we live in and its context runs parallel with the bands defiant nature. “A lot of people have asked me if I’ve written any songs about this fight with the corporation” says Nima, “This song was actually written over a year ago, but as we’ve been playing and recording it this summer the lyrics turned out to be prophetically relevant”. Proving that Arrows Of Love are one of a rare breed of bands that stand by what they preach when the moment calls.

Now, gearing up for the release of ‘PRODUCT’, the band are set to prove themselves the real deal. Drawing comparisons to the discordant, emotive musicianship of Sonic Youth to the raw power of McClusky, this second LP sees a band fully diversified, ready to release something truly unique.