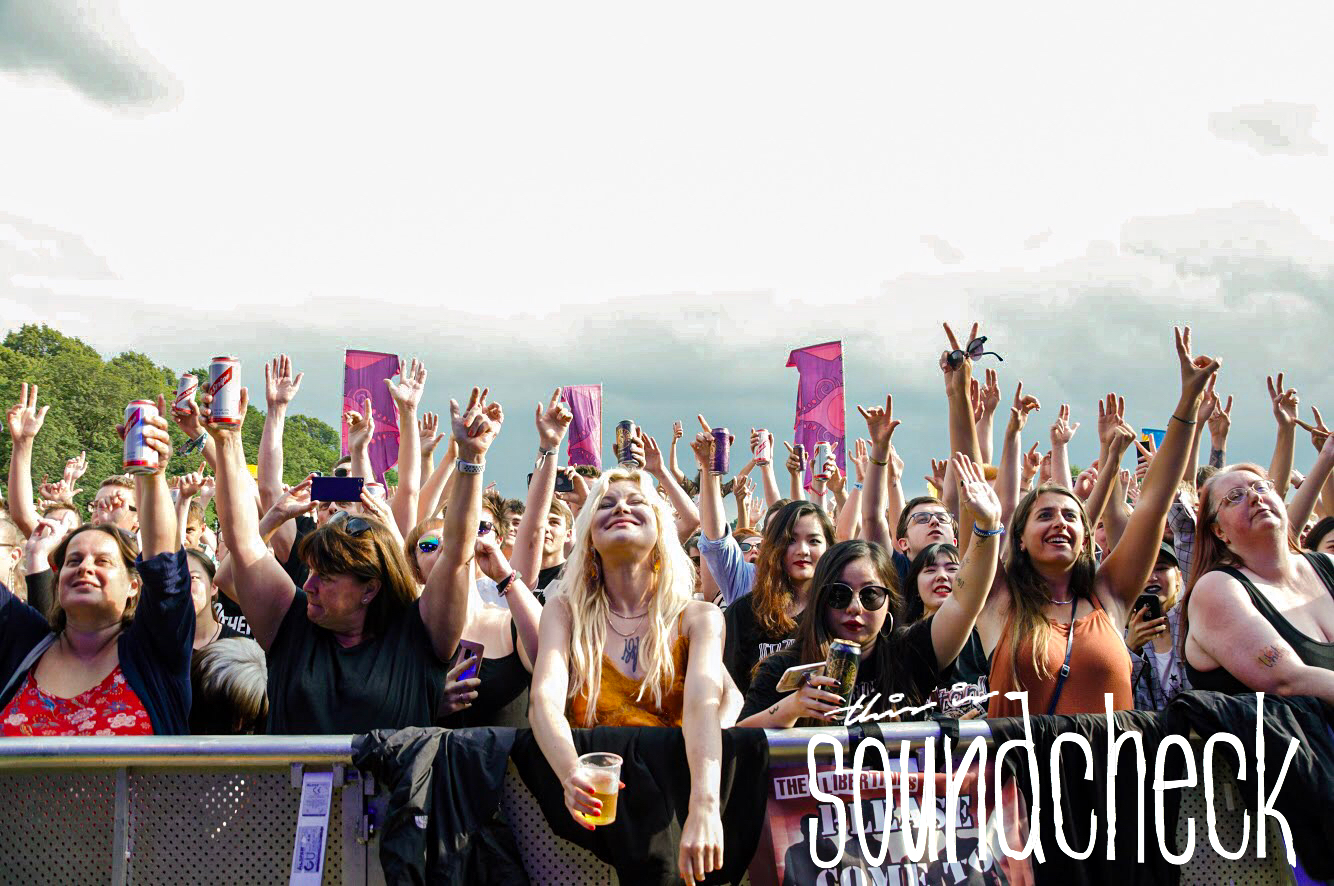 The inaugural event at Coombe Abbey in Warwickshire started with a few problems, but ended up being a decent success. With queues to get in spreading far and wide around the site and the first three main stage acts all being cancelled, the outlook didn’t look great.

After the rain had calmed down, the first act of the day to successfully make it to the main stage were Sheffield’s Good Cop Bad Cop. Their 40-minute set was a delightful treat of modern day indie pop blended with an essence of rock n roll. Comprising of Milburn’s Joe Carnall and Arctic Monkeys’ Matt Helders, they provided a decent opening set despite the still dwindling numbers being able to get in to the venue. Tracks such as ‘When You’re Not Winning’, ‘Times New Roman’ and ‘End of the Beginning’ deserved to be heard by more. A nice touch from the band was at the end of the set, they came down to the front barrier and handed out free copies of their debut album.

Next up to entertain the still small crowd were The Futureheads. Launching straight in to ‘The Beginning of the Twist’ the band gave a showcase to why they are so revered as a festival band. Mixing old hits with brand new material, they went down well and brought the crowd running to see what was going on.

By the time that Reverend and the Makers arrived, the sun was beginning to shine and the issues with getting people in to the venue seemed to have dispelled. From the first chords of ‘Bassline’, Jon McClure had the audience in the palm of his hand. Both band and crowd were bouncing throughout and gave a party performance worth of their Main Stage status. The swollen crowd were lapping this up, tracks such as ‘Open Your Window’, ‘Black Widow’, ‘Out of the Shadows’ and ‘Heavyweight Champion of the World’ shook the ground. The finale of ‘Silence Is Talking’ saw flares light up and the whole arena bouncing along and singing back the trumpet parts in harmony.

Circa Waves followed this with an exemplary set from their three albums. Despite the rain returning heavily throughout their performance, ‘Wake Up’, ‘Times Won’t Change Me’, ‘The Fire That Burns’ and ‘T-shirt Weather’ provided the summer feeling that was needed.

By now, the crowd was at full capacity, the atmosphere had changed to a celebratory mood and the festival feels were in full swing. As the rain started to dampen down, Tom Grennan and his band arrived in full swing with a rousing rendition of ‘Royal Highness’. Upping his game and now complimented on stage by a group of Gospel Singers, Grennan’s set was sublime. ‘Praying’, ‘Lucky Ones’, ‘Secret Lover’ and the final ‘Found What I’ve Been Looking For’ showcased his gravelly raw vocals off a treat.

A quick flick over the field to the Dance Tent which by now is packed out for a Sister Bliss DJ set. She drops a mix of classic belters and a few Faithless tunes which delight the rampant crowd.

Finally it is back over to the Main Stage for tonight’s festival exclusive, The Libertines. Arriving 5 minutes earlier than scheduled dressed in World War II fighter pilot boiler suits, the next era of Albion is upon us. They launch straight in to ‘Heart of The Matter’ swiftly followed by ‘Vertigo’. The set is very Libertines. Carl Barat and Peter Doherty sharing the mic, John Hassall looking effortlessly cool on his bass duties, and Gary Powell drumming like there’s no tomorrow. We get all the hits, ‘The Delaney’, ‘Boys In The Band’, ‘Gunga Din’, ‘Can’t Stand Me Now’ and ‘Time For Heroes’. There is no sign of new material which had been suggested in the run up to the festival. The encore sees further hits in ‘Horrorshow’, ‘Don’t Look Back In To The Sun’ and a frantic ‘What Became of the Likely Lads’ to close. A true headline set from a legendary act.

On reflection, the inaugural event at Coombe Abbey showed potential. There were a lot of positives including the free shuttle bus service to the City Centre and the small but accessible site plan. The lack of acts on the other stage however, saw a lot of people hanging around in the rain waiting for the next Main Stage acts. The criticism would have been that if you’re having an Indie/Rock day, put other bands on instead of a number of unknown DJs who failed to get the audience moving. The cancelled local acts on the Main Stage could have easily been accommodated in the tent rather than it being empty whilst DJs spun their tunes. With the potential to get even better next year, Coombe Weekender is definitely one to keep an eye out for.