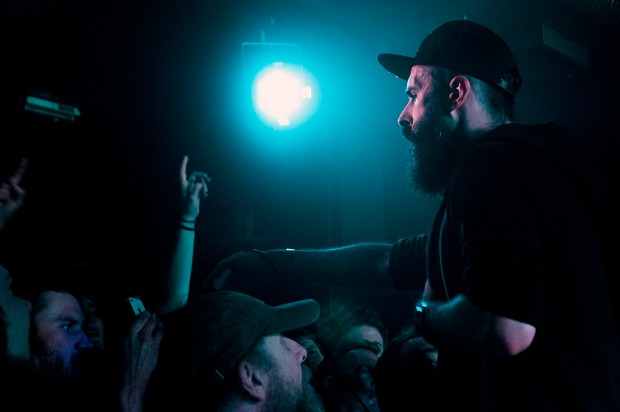 Kicking off their second leg of what could very well be their final ever UK tour, the atmosphere in the rather intimate surroundings of the Slade Rooms tonight is high. Having played The Institute in Birmingham back in February, tonight is a rather intimate affair.

The night kicks off with the wonderful Sarah Williams White playing out her experimental soundscapes to a rather enthusiastic, yet a small crowd tonight. It was a shame not many more got to see her, but those who did were rewarded with a glimpse towards a star in the making. Next up was the former King Blues frontman iTCH. Having released his debut solo album only a couple of weeks ago, there was a rather fuller crowd for him. Ricochet, Deep End, Bottom of The Glass and the closing Best Shot sounded loud, spiteful and certainly encouraged the crowd to swell.

Just after 9.30 the lights faded and Dan le Sac strides on stage under a rather fetching piece of Panda head gear. Off stage Scroobius Pip speaks the opening lines of Stunner. the lights fade out to a semi strobe effect and Pip walks on stage to a loud and rauchous amount of cheering.

Tonight’s set is peppered with classics and swathed in newer material from last year’s hit album ‘Repent Replenish Repeat’. Having toured repeatedly across the UK, Ireland and the EU since January, the newer tracks have found a life for themselves and sound much fuller than the previous excursion. You Will See Me, Nightbus Sleepers and single Gold Teeth sound incredible. Maybe a mix of the more intimate surroundings and the performance itself helped, but the audience were in a joyous mood which seemed to radiate to Dan and Pip on stage.

In a very talkative mood tonight, Scroobius Pip drops the unknown fact upon the Wulfrunians in the room. “I’m excited to be back in Wolves, I’ve never played Wolves before. But… the streets of Wolverhampton is where I first started writing my rhymes. I lived here for a couple of years around 2001…” cue a huge cheer as people process this. He then preceeds to inform us that he once had a giant billboard poster of his face opposite Molineux for a short while. When he was taking photos of his work, people would walk past and ask who the poster was of… not Wolverhampton’s finest moment when the person they’re asking is the subject.

Support acts Sarah Williams White rejoins the duo on stage for a run through of Cauliflower and iTCH returns for a lively rendition of Stiff Upper Lip. Get Better sees pretty much the whole room bounce before the finale of Thou Shalt Always Kill which sees a huge singalong and cheering. Everyone joining in with the middle “Just a band” shout out to the entire list of artists name checked. A cheeky change to the lyrics by Pip saw him educate us to “Never question Kenny Jacket” – a nod to the recent league win by Wolves.

The encore is made up of Introdiction and a powerful closing A Letter From God to Man. As Scroobius Pip bids us farewell, thanks us or coming and strides off stage, Dan takes the limelight by seguing the Radiohead sample into a 6 minute long techno remix of various tracks including The Prodigy’s Voodoo People. Refusing to leave the stage traditionally, Dan jumps off the front of the platform and walks through the crowd to leave through the front door.

All the acts from the bill tonight make their way to the merchandise stand to meet people who want autographs, photos or just a chat. A nice touch that a lot more of the smaller bands could pick up on. However, after an absolutely stunning, hot and sweaty performance, if Dan le Sac vs. Scroobius Pip are hanging up their coats after this tour and summer festivals, the music world is missing a fabulous act. Fingers crossed they prefer to just take a break and come back soon.