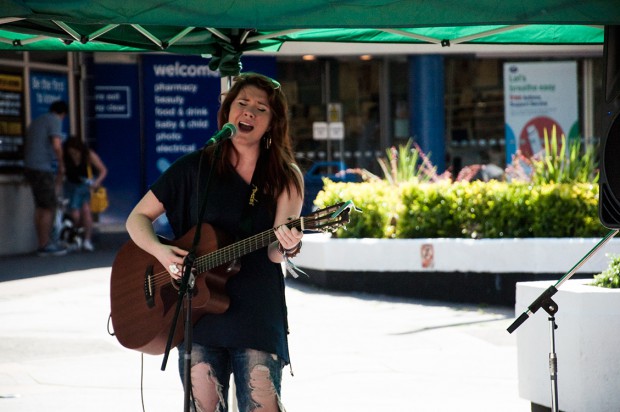 Slap bang in the middle of Britain’s “Summer heatwave” I find myself in the depths of Stourbridge High Street watching a number of acoustic acts entertain the crowds as part of the annual carnival. Typical British fun and games including a procession of local community groups, fayre rides, stalls and food – all good fun, including the ice-creams on a day like today.

However, my attention is drawn to the music. Unfortunately I missed the first few acts, but by the time I catch up with things, In Between Seas are gracing the stage. Their performance is confident and slightly humorous by the annoying fact that it is interrupted by the carival procession and a ton of schoolchildren chanting about the ‘Teddy Bear’s Picnic’… Forcing the band to stop for a moment to allow them to pass, it seems as if it has thrown them a little. I cannot help but feel the performance is marred by a little confidence issue. The songs are well crafted and I would certainly like to see more of them again.

After a break I return and have missed the start of Rumours of Spring. These guys have a good mix of own material and covers and interact with the small crowd very well. Kudos goes to the use of an upright bass. Always impresses me! Tom Lloyd follows and delivers a strong but short set of own material that shines strong and a healthy mix of covers. He has a strong voice but at the same time seemed slightly unconfident. Maybe it was me in the heat, however, his cover of Bastille’s ‘Pompeii’ attracted a few more to the fold and even a small sing along where I was stood.

I Am A Scary Monster takes the microphone next. I am instantly impressed by him. There’s a hidden spark, yet it seemed at times like he was holding back on his vocals in some parts. I felt if he had let himself go and really emphasised his vocals he would have attracted even more people. Again a nice mix of material, a slowed down cover of ‘Teenage Kicks’ being a personal highlight. He interacted with the crowd well and even managed to catch the attention of the stilt walkers. Definitely a name I will keep an eye on.

Finally, in a mid-afternoon headline set, we get the talents of Danni G. I first encountered her only a few weeks ago supporting StringerBessant. Something about this girl excites me, her confidence is like watching a musician who has been in the game for a long while, not 18 months. Even her “soundcheck” of KT Tunstall‘s ‘Minature Disasters’ is perfect. Her vocal style reminds me of a young Carina Round and her posture is elegantly KT Tunstall. Her covers range from Foo Fighters to Fun Lovin Criminals to Jessie J and more, but her own material shines strong. I’m sure it won’t be long before we get the first fruits from this young star, but until then, if you see her name mentioned playing somewhere, go and catch her! Within a couple of years I can guarantee that we’ll have another Carina on our hands with this young lady will be very well known.