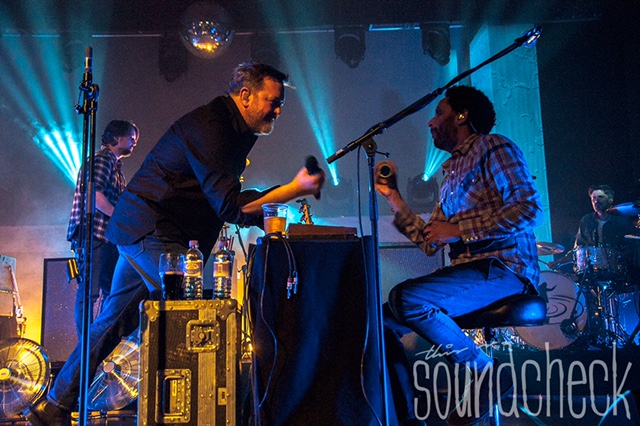 Manchester legends Elbow played the second of their two-night residency at Birmingham’s o2 Academy and managed to completely melt the hearts and souls of everyone who attended. Somewhat used to playing the larger arenas, tonight felt like an absolute triumph and a tiny bit underwhelming all the same.

The show itself is absolutely faultless, frontman Guy Garvey oozes charisma and warmth to even the coldest of hearts. His stage presence is that of a seasoned pro, but also shows that he could be absolutely anyone’s best mate down the pub. Not only this, but he has one of the strongest and diverse voices in the industry. Backed by the band, who in their own ways are incredible performers, the songs are belted out tonight with so much passion it is easy to see why they are so revered in the live circuit.

The show tonight is made up of a healthy mix of tracks from their entire career and those from the stunning new album ‘Little Fictions’. After a lavish set from newcomer C Duncan, Elbow grace the stage and arrive casually in to the arena arms aloft, holding beers and full of smiles. They open up with the glorious ‘Gentle Storm’ and swagger in to the classic ‘The Bones of You’.

The slight let down tonight feels that the setlist could have been more varied. The casual fan may have felt underwhelmed despite the quality of the sheer musicianship playing before their eyes, but the more drawn out songs feel a little more drawn out than on record. There are however, plenty of highlights that the super fan and the casual fan would have enjoyed. ‘Fly Boy Blue / Lunette’, “New York Mornings’, ‘Lippy Kids’ and ‘The Birds’ fails to do anything but make you swoon. A gorgeous ‘Mirrorball’ and a rare outing for ‘Scattered Black & Whites’ seal the deal in providing value for money and atmosphere.

The main set is curtailed by a duo of classic belters. New single ‘Magnificent (She Says)’ sees the biggest singalong of the night so far and one Garvey’s biggest grins as the ode to his daughter is providing so much comfort to the 3000 strong room. The duties of “last song of the set” tonight lie with ‘Grounds For Divorce’, a song which contains one of the most thunderous guitar lines in recent music history. As soon as the guitar crunches in you suddenly start to ask “If they are capable of this, what else could they pull out of the bag?”. Clearly this was the ultimate highlight of the of the main show and sees the audience calling out for more as the band depart the stage.

The band return after a few minutes, instruments retuned, and Garvey and Co. in sheer delight at the reception they are receiving. They begin the encore with the gorgeous ‘My Sad Captains’. This is as example of a track which actually suits the larger venues more. In an odd move, ‘One Day Like This’ comes in as the penultimate track instead of the traditional set closer. The euphoria in the rooms is lifted so high you could be anywhere. Strangers have arms around each other belting out the lyrics without a care in the world.

After a cataclysmic high, the band bow out in delicate style with a performance of new song ‘Kindling’. As the song develops, mobiles are held aloft to create a sea of lights akin to their many arena shows and festival appearances. Thanking us for our patience and for coming along tonight, Guy and the band take a bow to a sea of cheers and pints being raised.

Elbow conquered the intimate venue setting and gave a delicious taste of what to expect over the summer with their festival appearances and Forestry Commission shows. After wishing the setlist was a little more varied, there is nothing you could fault the Mancunian lads on. Their show is one of a grand status and deserves the bigger arenas, not a sentence you find yourself saying after seeing one of the biggest UK bands of the last 15 years in such an intimate setting.