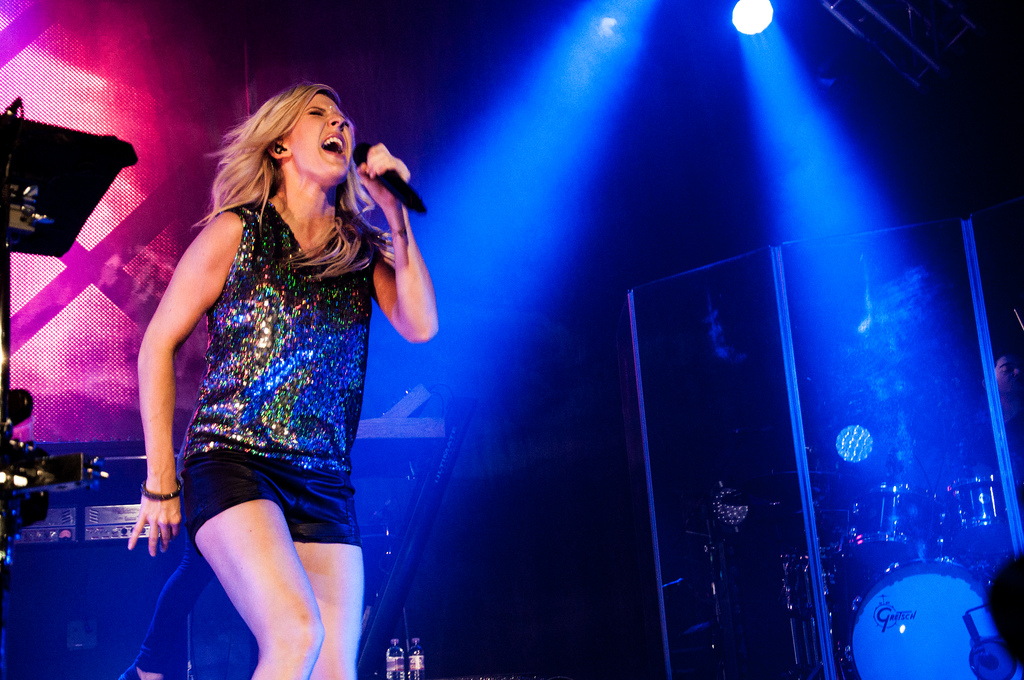 On the back of her first ever UK #1 single Ellie Goulding took to the stage in Wolverhampton with fire and zest. It had been nearly 4 years since she last played in the town and if you were lucky enough to catch that solo acoustic support slot, then tonight would have blown your mind.

The atmosphere in the Civic is always great, tonight there was a buzz and everyone seemed ready for action. As the lights dipped the screams were unfathomable from where I was stood. The band walks on and start playing a rather deep electro rhythm. The front rows start going ballistic in terms of screaming as Ellie saunters from the backstage into the centre. Without saying a thing she stands in front of her mic, raises her arms and as the music crashes in, she’s off like a rocket and launches into a frivolous version on ‘Figure 8’.

In terms of performance, she has it all. She has sex appeal, she has a unique vocal styling and she has the songs. She may have stepped away from the acoustic guitar which made her name to begin with, but now she has turned into a brand and a show. Tonight she is in a sparkly top and a pair of incredibly short hot pants. Her crowd interaction throughout is both appreciative and honest. ‘Ritual’, ‘Goodness Gracious’ and the splendid ‘Animal’ really build up the tension in the room and seem to get the whole floor swaying in a mass party atmosphere. ‘Starry Eyed’ comes a little too criminally early in the set for my liking, but nonetheless goes down a storm, always a live highlight.

‘Stay Awake’ is another dance anthem which keeps the momentum of the crowd going. Who would have thought that the little innocent girl from Herefordshire who sang songs with an acoustic could turn into a dance queen? Okay, a few of you then. The mood drops as the band step into the darkness leaving Ellie alone on a big stage. She brings out an acoustic guitar and somehow dominates the whole audience with just a single strum. We get a huge sing-a-long to ‘Guns and Horses’, one of the highlights of debut album ‘Lights’. She explains how she has been away in America for a very long time but somehow coming home and hearing everyone sing along with her always reassures her.

The mood is kept low, anthemic and delicate for the next few as the band return to the stage. ‘I Know You Care’, ‘Your Song’, ‘Joy’ and ‘Explosions’ all following each other are a tough ride. In the right frame of mind I could have crumbled and almost did. Her delivery pulls on the heartstrings and makes you feel what she is singing. There is no question, this girl can sing her heart out live and she does it very well indeed.

The pace picks back up with ‘Only You’ before the mega single ‘Anything Could Happen’ tears the roof off the Civic. The whole room sings along with the voice sample “e-e-ee-e-e’s” and as the beat drops, again, we are bouncing our hearts out. ‘I Need Your Love’ slips in next ahead of set closer and fan favourite ‘Lights’ which is given a remixed ending keeping the dance vibes going. As she thanks us and leaves the stage the audience are calling out for an encore.

She obliges and returns to the stage again for a second wind. ‘You, My Everything’ sees me looking around the room trying to locate someone I hoped was there to no avail, but again sees the room begin to sway. This is probably the nearest to a “mosh pit” you could get at a pop concert, but it is all good fun. In traditional style though, her biggest hit to date is reserved for the last performance of the night. Recent UK #1 single ‘Burn’ is something else in the live arena. It’s a damn good pop song, but it has more power and oomph live. Towards the end of the song Ellie backs off towards the side of stage and picks up an electric guitar. This girl has more tricks up her sleeve. She produces a few loud power chords as the song’s dynamics grow into an electrical monster. The only way she could have made it slightly better would have been to produce a rip roaring guitar solo, but alas it seems as if she was actually holding back! She climbs the drum riser and guitar in hand jumps back to centre stage. The crowd cheers even more as we realise this is it, the show has come to an end. Where has the last 90 minutes gone?

Ellie Goulding is not everyone’s cup of tea I will admit, I never thought I personally would get her as much as I do. But my god if you get the chance, go and see her live. Her show is an absolute gem and highly lively. She returns to the UK next year for some huge arena shows culminating in a finale at the o2 Arena in London. I am very tempted to grab myself a ticket for that. She’s a diamond.