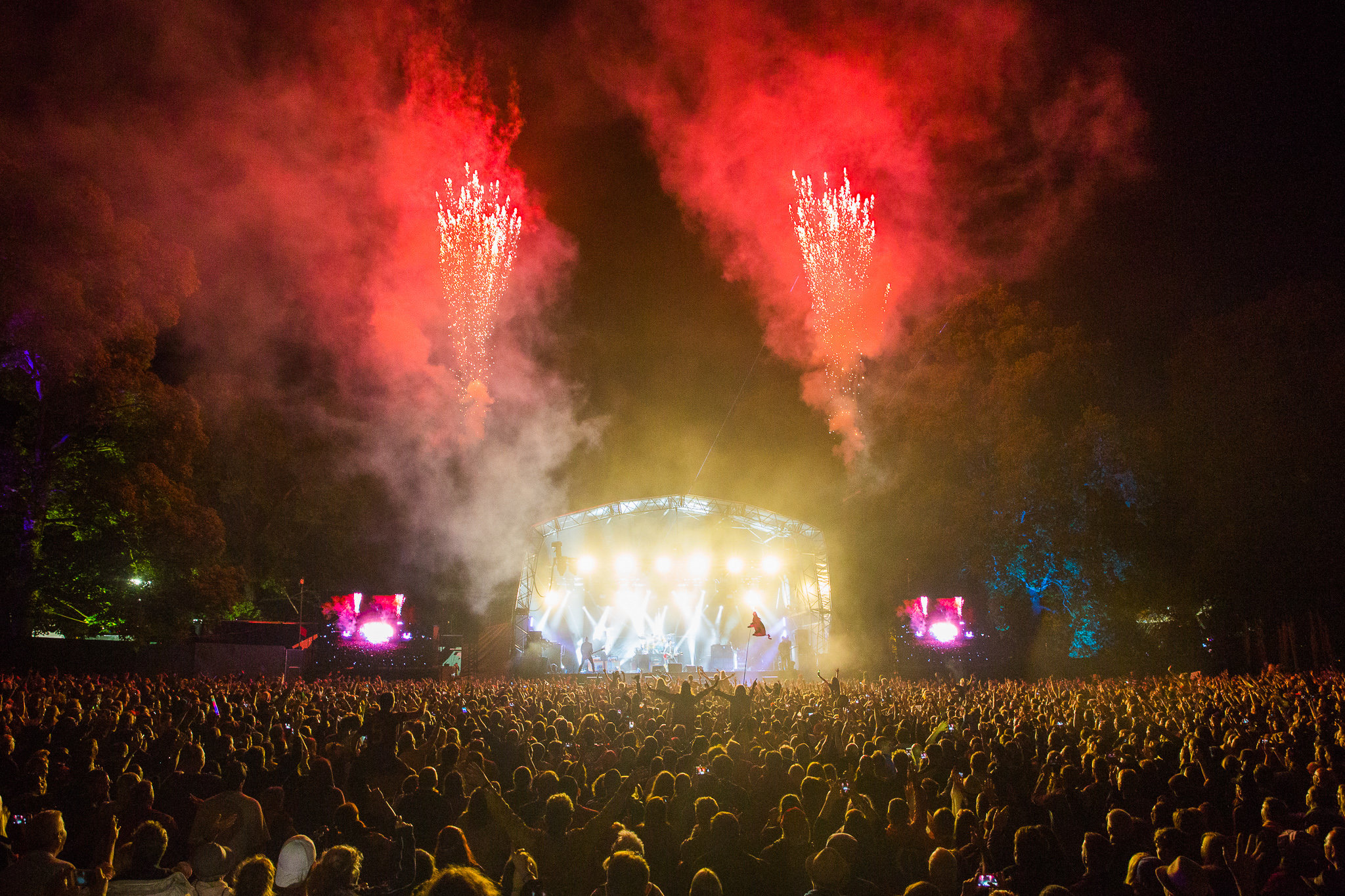 Fan-favourite, award-winning festival Kendal Calling has announced the huge lineup for 2018. Catfish and the Bottlemen, The Libertines, Run DMC and Hacienda Classical will be headlining with a huge supporting bill all heading to the fields this summer for an unmissable weekend of music, arts, comedy, food and drink in the beautiful Lake District, now a UNESCO World Heritage Site.

With 2017 marking the 12th consecutive sell out for the festival and selling out just one week after announcing the lineup fans are encouraged to snap tickets up quickly to avoid disappointment. Tickets are on sale on 10am Friday 2nd February from kendalcalling.co.uk

Since the release of their debut album ‘The Balcony’, Catfish and the Bottlemen’s rise to the top has been nothing short of stratospheric. Sophomore effort ‘The Ride’ saw them establish themselves as one of the true stars of the burgeoning British guitar scene and this summer they head back to the fields for a headline set that’s not to be missed.

True heroes of indie and a band who were sorely missed during their lengthy absence, The Libertines will be making a long overdue trip to Kendal Calling. Having reformed and re-established themselves as kings of their genre, Pete, Carl, Gary and John will be bringing anthems from their three huge albums to the fields!

The term legends is thrown around far too often but one group to which it undoubtedly applies are hip-hop royalty Run DMC. With an arsenal of huge hits including ‘It’s Like That’, ‘My Adidas’ and ‘Its Tricky’ under their belts, it’s hard to see who could provide a bigger sing along moment at this year’s Kendal Calling.

Kicking proceedings off on the Thursday night is a special show from Hacienda Classical with the Manchester Camerata, the city’s experimental orchestra playing a new set of huge classics. 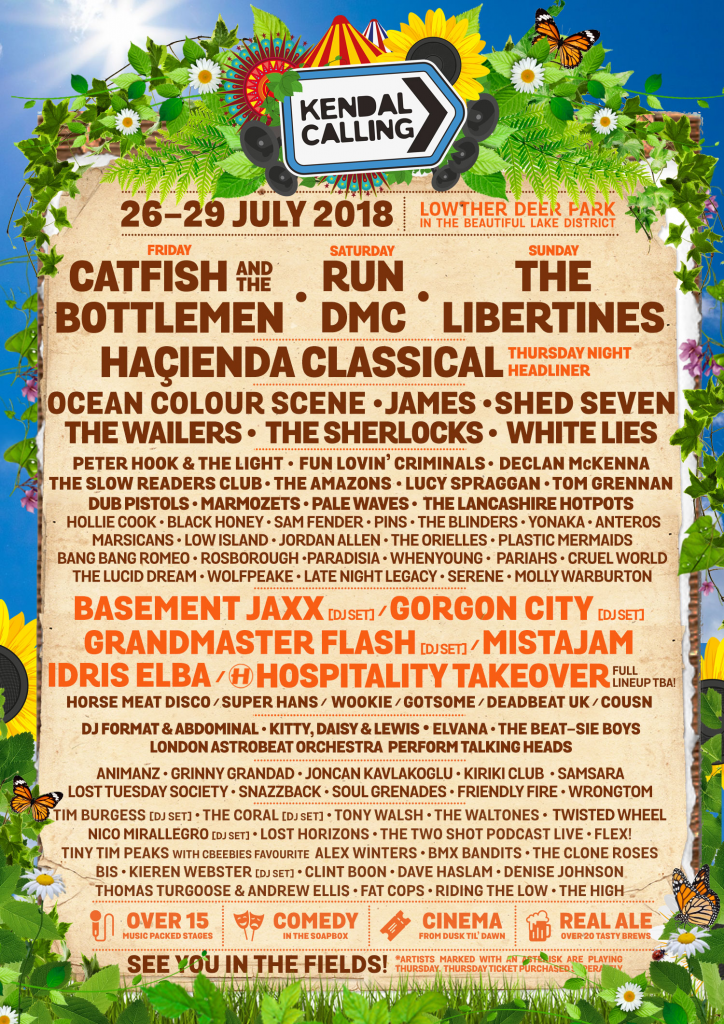 Festival Director, Andy Smith comments: [quote style=’1′ cite=”] “We’re thrilled to be heading into our 13th year and can’t wait to head back to the beautiful Lake District for another weekend of music, art, food and a couple of Kend-ales. We’re lucky to have one of our biggest lineups ever and can’t wait to welcome hip hop royalty Run DMC to the festival alongside our other headliners Catfish and the Bottlemen, The Libertines and Hacienda Classical. See you in the fields!”
[/quote]

Peter Hook, Manchester legend says: [quote style=’1′ cite=”]“I’ve always loved the Lake District and the opportunity to play with both my favourite acts, Hacienda Classical and The Light at Kendal Calling, coming there for the first time this year is really a dream come true. Who could possibly turn down double bubble.”[/quote]

Fun Lovin’ Criminals say: [quote style=’1′ cite=”]“It will be our pleasure to bring the FLC style to the Lake District this summer alongside the real Kings of New York; Run DMC!”[/quote]

The Sherlocks comment: [quote style=’1′ cite=”]“Absolutely buzzing to be returning to Kendal Calling! Bring it on, it’s going to be special!”[/quote]

Simon Fowler of Ocean Colour Scene says: [quote style=’1′ cite=”]”Myself and Oscar played at Kendal Calling a couple of years ago so this is a fantastic opportunity to come back and bring the full band to play at this great well known independent festival ”
[/quote]

Those wishing to get their dancing shoes on need look no farther than the Glow Dance Stage. With a lineup featuring DJ sets from Basement Jaxx, Gorgon City and all round superstar Idris Elba, a special takeover from DnB stalwarts Hospitality, sets from Grandmaster Flash and Mistajam, alongside Horse Meat Disco, Wookie and Gotsome, get ready to rave the night away.

Anyone exploring the Woodlands will be treated to sets from Elvana, The Beatsie Boys, Jamie & Shoony, Satyr Play, 100 Fables, The K’s, Rats, Brownbear, No Hot Ashes, North Atlas, The Lottery Winners, Citrus Heights and more to come as well as an array of incredible art installations.

Set in the incredible setting of the Lake District’s Lowther Deer Park, this innovative, fan-focused, independent festival is renowned for more than just music and visitors will also enjoy 4 days of arts installations, comedy, gourmet food, kid’s entertainment and a real ale festival all within the confines of what is surely the most beautiful festival site in the UK.

Last year Kendal Calling sold out completely just one week after announcing the lineup so fans are advised to snap up their tickets quickly to secure their place at this year’s festival. See you in the fields