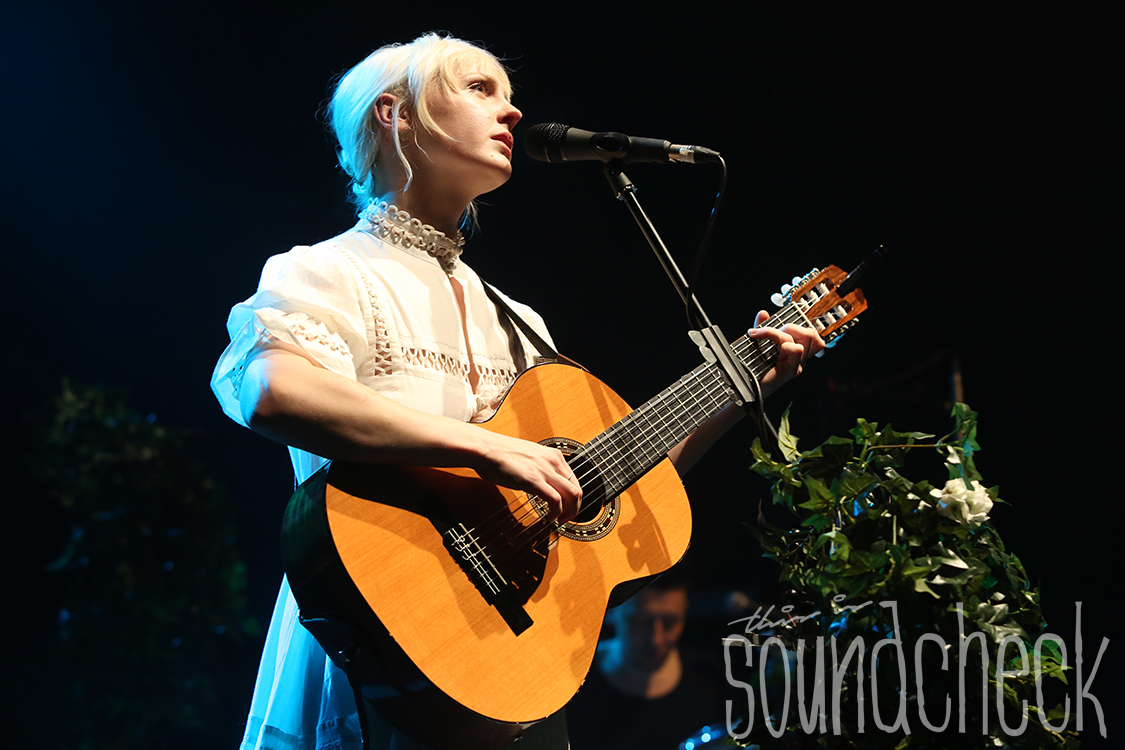 Arguably, already the most intimate Midlands venue, the O2 Institute in Digbeth, Birmingham, looked especially exquisite for Laura Marling’s gig, with its stage decked with foliage. Dressed in a beautiful flowing classical white dress, statuesque and commanding, Laura soon turned this set from Garden of Eden into her own church – she even expressed her pleasure at increased numbers in attendance since her last service.

For anyone whose previous experience of Laura Marling live was on her cathedral tour, with gorgeous acoustics swirling around vast chambers, this gig – a 17 song service – was instantly just as mesmerising, entrancing all worshippers present – a surprisingly mature demographic with even gender balance- from first to last note. A case of ‘semper optima’ (always the best) maybe.

Despite confessing, when introducing her final new album track, that she always found new songs infuriating at gigs, her congregation did not agree, heartily welcoming ‘Soothing’, ‘The Voice’ and ‘Wild Fire’ – so reminiscent of the late Lou Reed epic ‘Street Hassle ‘- like the best of old friends.

Harshly, much in the past has been said about Laura’s apparent lack of stage confidence. With such resonant vocals and empowering lyrics, the music has always spoken for itself and her humility has been highly regarded. Tonight though, Laura defied any critic, delivering a sensitive selection of quality songs from her back catalogue, awesome new music and endearing conversation. This tour even has a new game – when introducing her band, she asks them all to offer a fact. Such was the confessional atmosphere that Emma Topolski, who alongside sister Tamsin had added the most angelic backing harmonies all evening, revealed she was pregnant to a tremendous crowd roar.

Throughout the evening, Laura’s congregation respectfully and eagerly hung on her every note and word. So mesmerising was the performance that there was barely a camera phone raised and, inbetween songs, audience reaction was limited to the very occasional whistle and whoop. The only appropriate worship was vociferous applause and rapt attention.

Highlights were ‘Always This Way – reminiscent of Eddi Reader – a rocking ‘Nothing, Not Nearly’, her full solo set midway – a taste of later dates on the tour – but especially ‘Sophia’ with its heavenly choir and full band crescendo, ‘Don’t Ask Me Why – raspily sounding like Eartha Kitt – segued into ‘Salinas’, ‘Darkness Descends’ – as exuberantly close to a Mumfords vibe as you would ever reach – and of course, crowd-pleaser and final song of the night ‘Rambling Man’. Throughout the sermons, prayers and hymns, Laura’s were reverent and left further inspired by the experience of the service.

So, if the opportunity arises to grab a ticket for this tour or her festival appearances later this year, do so. At 26, a staggering 9 years after her first release, album number 6 ‘Semper Femina’ has just been released, clearly establishing Laura as one of our most successful and prolific singer-songwriters. She’s also such a strong role model for our modern times and her new album proves her muse is refreshed and powerfully creative.