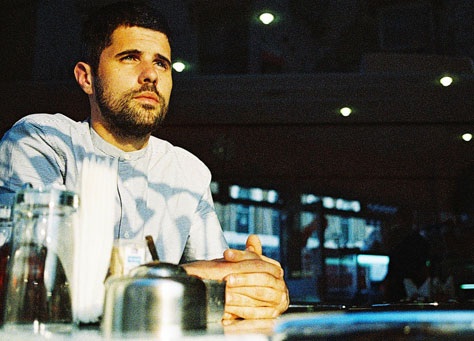 Although the stage at Edinburgh’s Electric Circus is relatively small, it appears endless surrounding Nick Mulvey (formerly of Portico Quartet) who stands front and centre with a single acoustic guitar. Opening for Nick, was Eaves who also relied purely on his acoustic companion. Without a backing band for either acts, the stage was devoid of cluttered drums and redundant guitars, and the unmistakeable fragrance of fruity cocktails and craft beer wafted  freely across the main room.

The last time Nick Mulvey performed in Edinburgh was as support for Laura Marling at the much larger Usher Hall.
“You looked so small!” somebody who saw him at Usher Hall shouted out.
“…On that big stage? I felt enormous…” Nick Joked. As the third stop on his UK tour, and the only Scottish date, this particular show was sold out. “I’m amazed, and very very touched that you’re all here.”

An hour after the doors open, solo act Eaves hops onto the stage looking like John Robinson as Stacy Peralta in the 2005 film, Lords of Dogtown. Despite the chattiness of the crowd throughout his set, he delivers a sound reminiscent of Fleet Foxes and First Aid Kit (without the duel harmonies) between swigs of Peroni. It isn’t until an hour later, when Mulvey steps into the spotlight, that the crowd finally tears their attention away from their conversations.

With Mulvey standing on the stage, staring out expectantly like a teacher in front of his noisy students, the girls that made up the majority of the audience finally got the message and chatter from the crowd disappeared. Immediately, his fingers began to dance along the strings gracefully. Bouncing lightly on his feet to the rhythm, he plays songs like ‘Fever to the Form,’ and ‘Look at Miss Ohio.’ Midway through his set, he performs a slightly different version of his 2013 single ‘Nitrous,’ which excites the crowd who gratefully hums along. After ‘Nitrous,’ he launches into a cover of ‘I Feel Love,’ by Donna Summer’s 1977 concept album, playing his guitar strings creatively enough to win the applause of the crowd halfway through the song.

After a few new tracks such as ‘Venus,’ which will be on his upcoming debut album (May 12), he claims that this is his final song of the night, and begins to play his latest single ‘Cucurucu.’ Despite being the most recently released track of the night, several fist pumps are visible from the crowd and nearly everyone seems to know the lyrics. Regardless of his previous proclamation that an encore wouldn’t be necessary, he returned to the stage after climbing down for a moment to play one last track, ‘House of Saint Give Me.’

Mulvey’s fretwork is unforgettable, with layered patterns and Spanish influenced picking. While his guitar playing can be taken for granted in recorded tracks, his live performance draws attention to the delicate string melodies.