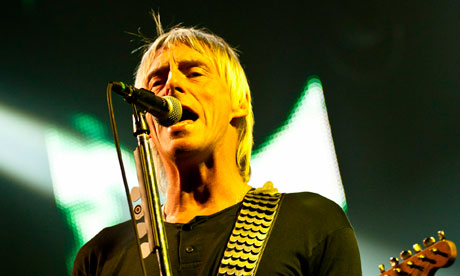 Paul Weller has unveiled the video for his brand new single, ‘Dragonfly’, and you can watch it below. The NSFW video to the ‘Sonik Kicks’ single features a naked model writhing around on a bed whilst images are projected onto her body. ‘Sonik Kicks’ comes out on 26th March and contains a total of 14 tracks. It also includes guest appearances from Noel Gallagher and Blur’s Graham Coxon.

Weller will play five London shows to promote the album’s release. He will headline the UK capital’s Roundhouse venue on March 18th, 19th, 20th, 21st and 22nd. Weller will perform ‘Sonik Kicks’ in full at the shows. Paul Weller recently discussed his battle with drink, stating: “I think I’m an alcoholic”. In an interview with the The Times, the singer revealed he had given up drinking over a year ago because he feared that his hedonistic lifestyle was going to kill him. Weller said:

“I feel fitter now. I go to the gym. Stopped drinking about 16 months ago… Time for a lifestyle change. I couldn’t keep doing it. It was killing me… I miss the silliness… I’m not one of those people who can just have a couple of drinks. If it’s two, it might as well be 20. If it’s 20, it might as well be 40…”.