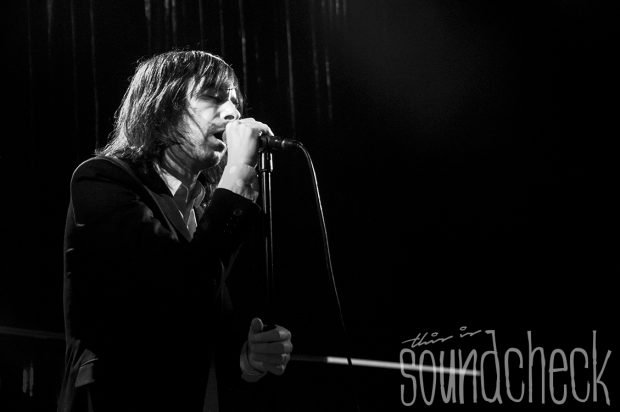 On an icy cold winter’s night in the middle of Birmingham, the hottest place to be in town tonight is at the o2 Institute in Digbeth as one of the UK’s most volatile and important bands of the last 20 years are about to grace the stage in the midst of a UK wide tour.

Primal Scream have danced previously with experiments in electronica, soul, and trippy dance, but they have always been and always will be fundamentally a rock n’ roll band in the truest form.

Tonight starts with the opening act of London’s Bo Ningen. Arriving on stage to a rush of excitement, they grasp the audience’s attention with their high-octane, unique brand of pumped up rock. With each band member thrashing around the stage, there is enough hair flying around to resemble a full band of Animals from the Muppets. Highly entertaining and brilliant music.

Arriving on stage bang on 9pm, Bobby Gillespie and co. greet Birmingham arms aloft and ready for theor own unique party. Kicking off with the 1991 classic ‘Movin’ On Up’, the audience are already joining the groovy train with the band. Proving that there is still plenty of life in the old rockers yet, this years’ comeback single ‘Where The Light Gets In’ follows swiftly like an old favourite.

Although the set tonight feels a little short (15 songs), there is a very healthy mix of classic hits such as ‘Jailbird’, ‘Accelerator’, ‘(I’m Gonna) Cry Myself Blind’ and ‘Swastika Eyes’, all working coherently alongside material from this years’ brilliant new album ‘Chaosmosis’ including ‘100% Or Nothing’ and ‘(Feeling Like A) Demon Again’.

Bobby Gillespie seems in a subdued mood tonight as if waiting for the crowd to pick up a notch, asking the audience to get louder for a Sunday night. The rest of the band are sublime and flawless; Andrew Innes’s guitar work is loud, piercing and grungy, Martin Duffy on keyboards and Darrin Mooney’s drumming pull the band in time completed by Simone Butler’s thunderous basslines prove why she was a natural replacement for Mani.

Crowd highlights tonight are reserved for the classics however. ‘Loaded’ is treated like the indie anthem it has become, sprawling into a psychedelic groove laden monster slowly taking over the venue and elevating the contented mood even higher. ‘Country Girl’ brings the main set to a cataclysmic end. Bobby Gillespie rocking and dancing around the stage having the whole audience eating from the palm of his hand.

The encore tonight begins with the riff heavy ‘Kill All Hippies’ from 2000’s ‘XTRMTR’, sending the audience in to a meltdown. Finishing off tonight with the classic ‘Rocks’, Gillespie and co. bring out their very best Rolling Stones licks and moves. Bobby bids us farewell, arms aloft as he leaves the stage followed by the rest of the group.

Always a great live band with plenty of hits to their arsenal, tonight felt a little strange in the respect that the show was over far too quickly. However, as the Scream always feed off the crowds’ energy, let’s just hope next time they are back on stage, the rock n’ roll is reborn.