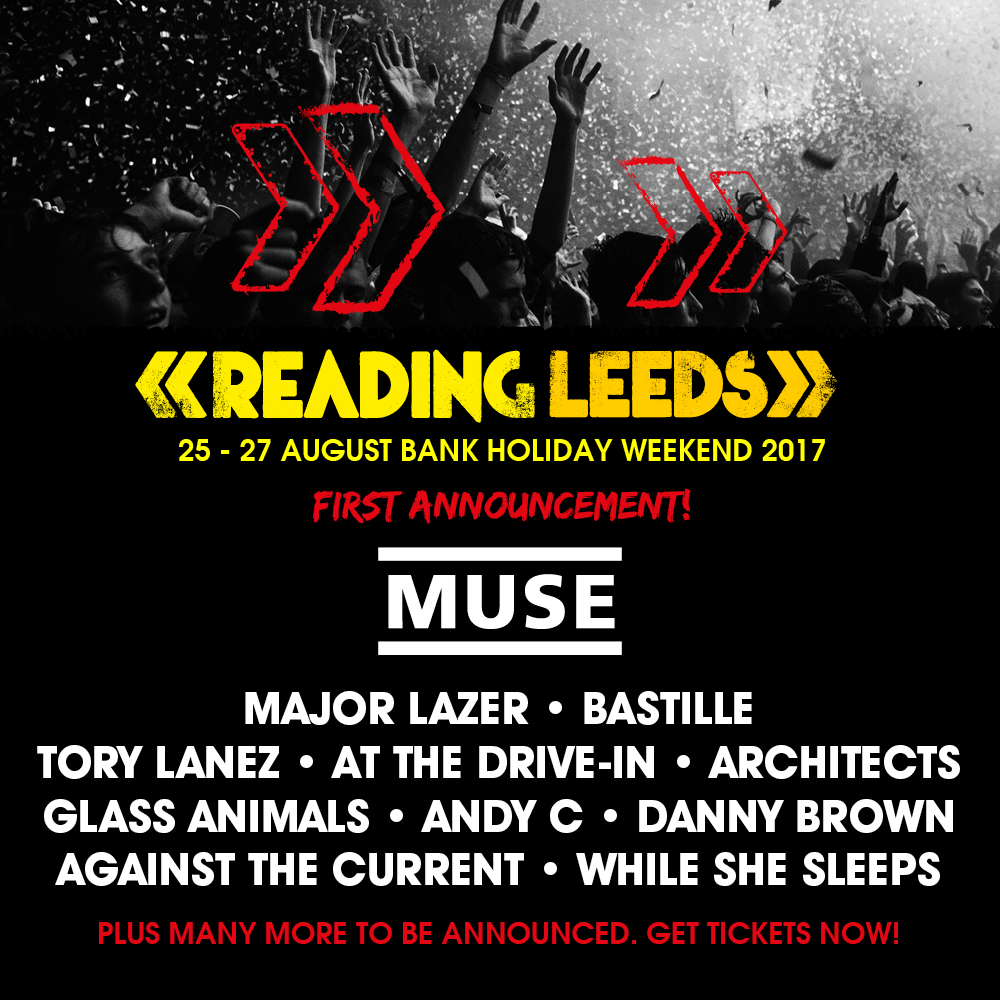 Stadium rock royalty, Muse are one of the most influential and revered live bands of modern times. Led by the commanding presence of frontman Matt Bellamy, the trio have taken to the biggest stages around the world with their interstellar anthems for over 22 years, and their return to Reading & Leeds promises to be yet another landmark moment in their storied career.

Muse commented:
[quote style=’1′ cite=”]”We’re very excited to be playing Reading and Leeds again. More news about our plans for 2017 coming in the new year.”[/quote]

Melvin Benn commented:
[quote style=’1′ cite=”]“I’m thrilled to be able to announce Muse as the first headliner for Reading and Leeds 2017. Their incredible live show promises to be an unforgettable performance – we have so much more to announce and I can’t wait to reveal the rest of the line up.”[/quote]

Also confirmed for Reading & Leeds 2017 in a UK Festival Exclusive, are dancehall-rejuvenators Major Lazer. Diplo, Jillionaire and Walshy Fire have become the soundtrack of modern dance, claiming No.1 records, chart-dominating tracks such as ‘Lean On’ and ‘Cold Water’ as well as live shows packed with genre-mashing moments promising an unrivalled party atmosphere.

With a worldwide legion of fans and a catalogue of defining pop anthems, Bastille stand as one of the biggest acts on the planet. Their storming breakout album Bad Blood saw the band catapulted onto playlists, sell out venues, scooping BRIT Awards and selling over 7 million albums. With latest LP Wild World once again dominating the charts on both sides of the Atlantic, expect to witness a crowning moment as true modern titans return to Reading & Leeds.

At The Drive-In are set to bring their high-octane and powerful live show to Reading & Leeds this year, returning to the festival after their sold out world tour in 2016. Establishing an entire genre with their seminal 2000 LP Relationship Of Command, their unpredictable live shows bring a timely reminder as to why they remain such an influential powerhouse in alternative music.

Having released one of the most critically revered hip hop records of the year, Danny Brown will be bringing his world renowned individuality to the stage at Reading & Leeds Festival. Throughout his musical career he’s remained daring and distinctive when delivering his personal message, resulting in an atmospheric and emotional performance that’s not to be missed.

In terms of celebrated post-hardcore British bands, none may be as vital and influential as Architects. Through a career with numerous defiant moments, Brighton’s very own have forged a path of their own such as recently headlining a mammoth evening at London’s Brixton Academy fresh from the release of acclaimed album All Our Gods Have Abandoned Us. Expect an emotionally charged return to Reading & Leeds for a UK Festival Exclusive performance of immeasurable significance.

Glass Animals continue to demonstrate why they are set to be one of the true global breakthrough artists of 2016. How To Be A Human Being was released at the end of August via Caroline International / Wolf Tone to rave album reviews, and Radio 1 and 6 music A-listed singles ‘Life Itself’ and ‘Youth’. The band have had a phenomenal live year, selling out their entire UK, EU and US tours and amassing well over 200 million Spotify streams. 2017 will see the band continue their anomalous rise, starting with Singapore, Australia and New Zealand in January, followed by the band’s biggest UK tour to date, including Brixton Academy on March 16th.

One of the most recognisable voices of the past 12 months, Tory Lanez will be making an appearance at Reading & Leeds 2017. With standout single ‘LUV’ heralded as an indisputable late-night party anthem, the Canadian breakout star is on the cusp of world domination.

Powered by catchy, upbeat melodies and the strong voice of frontwoman Chrissy Costanza, Against The Current will dominate their first ever Reading & Leeds performance with tracks from this year’s debut album In Our Bones. They’ll be joined on the bill by drum and bass icon Andy C. His incredible career has seen him headline some of the biggest stages and moments in the genres history, most recently including his sell out shows at Brixton Academy and Alexandra Palace. Equally as momentous will be the return of While She Sleeps, British metalcore’s undeniable DIY heroes who’ll be back in 2017 with their anticipated third album You Are We.

With hundreds of acts set to play across eight stages, Reading & Leeds is once again the unmissable festival weekend of the summer – defining and celebrating the who’s who of modern ground breaking music.