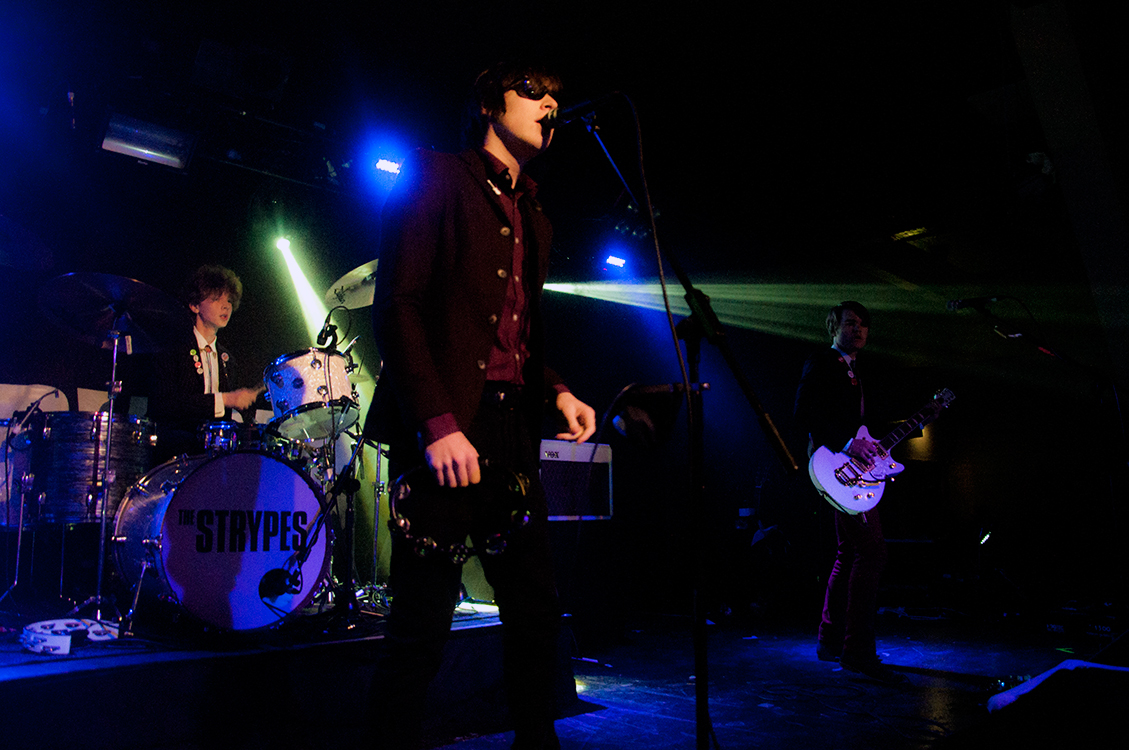 On a cold and wet Sunday evening, there is only one place to be in Birmingham tonight. Living up some good old fashioned Rock n’ Roll from one of last years’ surprise groups: a bunch of 16 year old lads from Cavan in Ireland – also better known as The Strypes.

Having made an impact with the likes of Zane Lowe and Paul Weller with their debut single Blue Collar Jane, they soon gained noteriety for their electric live shows, cramming a mix of high energy originals with rock n’ roll/blues by numbers covers. A nice series of exposures from festival season last summer culminating in a high profile support slot on the Arctic Monkeys’ UK Tour gave the youngsters a real boost in confidence, not that they needed it.

Tonight is no exception. After a low key couple of months, The Strypes are back with a revamped live show and a new ep in tow. Bang on 9pm, the lights go down and the four lads, also known as Ross Farrelly, Josh McClorey, Pete O’Hanlon and Evan Walsh. Kicking off with What A Shame, they seem in a good mood and full of energy by the way that all areas of the stage are covered from the off. Ross Farrelly is donned with his trademark sunglasses and big beaming grin, lead guitarist Josh McClorey is soon reaching over the edge of the stage into the front rows as he expertly plays as if 40 years his senior. Bassist Pete O’Hanlon with his mass of hair are like Speedy Gonzales racing over his area of the stage and drummer Evan Walsh looks ever the young professional whilst thumping away with vigor.

The band tear through an impressive 23 song setlist in just under 1 hour 20 minutes, yet it feels like it’s gone in a flash. Sprinkled throughout the set are some interesting covers. We get the likes of I’m A Hog For You and Ooh Poo Pah Doo which they have been playing for a while, but new covers replace those lost. A spontaneous cover of Chuck Berry’s Too Much Monkey Business is the first to appear, tribute to local boys The Specials arrives in a cover of Concrete Jungle, Louie Louie by The Kingsmen and Rockaway Beach by The Ramones also make an appearance.

Droppping new tracks in to a standard setlist is never an easy feat for most bands, but tonight, The Strypes succeed. Having released ‘4 Track Mind’ only days before, the new songs are treated like old frineds. I Don’t Wanna Know and So They Say sound impressive and almost show a new depth to their playing skills, Still Gonna Drive You Home works very well as the opening track of the encore, but most impressive of the night is new single Hard To Say No. On record it sounds pumped up and sprightly, McClorey’s slide guitar comes across as expertly played in the live arena and propells the track along at a sheer velocity. Farrelly’s gravelly vocals sound more mature than he is, but really strong on this performance too.

The big screams of the night from a mass of young fans re reserved for the more familiar material from the lads’ debut record ‘Snapshot’. The likes of Angel Eyes, I can Tell, What The People Don’t See and Mystery Man have matured since their early days, but still sound beefed up and perfected even more so. The big hits bring out the bigger screams and dancing though, Hometown Girls is the joyous bundle of fun it always has been and Blue Collar Jane gets a prolonged teasing riffed intro before kicking in and making the intimate venue feel like an arena. There is crowd surfing from the font quarters and even the older die-hard mods at the back cannot help but nod their heads in approvement.

For those last year who marked these young boys off as a “one off” or a “one hit wonder”, then prepare to eat your words. With electrifying shows like this, they will only continue to impress and spread their name in the honour of good old rock n roll. The fact that this tour is pretty much completely sold out should be enough.  These lads are here to stay for a long while yet.