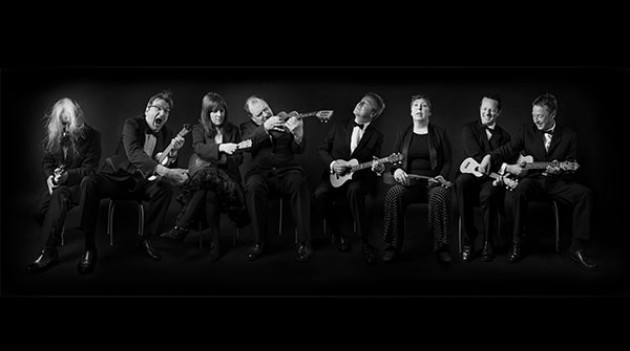 Its great to see a band stretch outside their comfort-zone to put on a show. Thats exactly what UKULELE ORCHESTRA OF GREAT BRITAIN did to mark 100 years since the start of World War One, performing a specially commissioned show by the Birmingham Town Hall.

Those who are familiar with the work of the miniature stringed-instrument eight-piece act will know that usually on the repertoire are covers of Nirvana, Blur or Kate Bush. However, this truly unique show, titled ‘When This Lousy War Is Over’ containing songs from the war-time and after, had the group trawling through the National Archives and wartime memorabilia researching their origins.

One of the impressive elements of Ukulele Orchestra of Great Britain is there exceptional ability to shift between genres. The gorgeous German-British version of ‘Silent Night’; where bass-ukulele player Jonty Bankes took the reigns to sing in German whilst founding member Kitty Lux sang the English version was one of the highlights of the two-hour set. The reasons behind why the acts chose various songs were also interesting and fitting with the show; from a diary entry of a relative, to songs family members played to them as children – this seemed so much more than a straight-forward concert.

The history was informative too; with songs from across the globe marking the true nature of the ‘World War’; traditional Chinese and African instrumentals fitted perfectly with the style of the show. The captivated crowd were entertained with humorous numbers like ‘Plink Plonk’ (originally by George Formby Snr; the lesser known father of ukulele maestro George Formby) and ‘Snoopy vs. The Red Baron’ a song released in 1966 by The Royal Guardsmen. More poignantly, the show also delivered songs which echoed from the trenches including ‘When This Lousy War Is Over’.

The Birmingham Town Hall can hold their heads high for commissioning a well thought-through show performed by a truly talented collective of musicians. The band have over 29 years of experience travelling the world to perform their usual sets; however, with just two shows at the Town Hall, Birmingham and one show in London for this unique run, it was more than a privilege to be part of it.