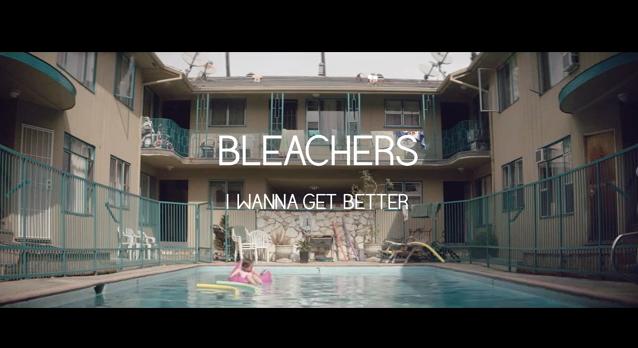 Jack wrote and co-produced the track alongside John Hill; who has worked on tracks by MIA and Jay-Z. ‘I Wanna Get Better’ features a cinematic video which was directed by Lena Dunham. Bleachers have been confirmed for Wireless Festival in London and Birmingham on 5 and 6 July; however more dates are expected soon.

[quote style=’1′ cite=”]I didn’t plan to start a new project. Furthermore, looking back on it, it was an extremely un-ideal time to make a record, as I was on a world tour with fun. Yet I felt extremely compelled to do it. Many times when I should have been asleep, or resting, or eating, I would go to the studio. In Stockholm, Malaysia, in my room recording all day in Australia, literally all over the place. When I’d have two weeks off, I’d head into the studio in New York or L.A. and sift through everything I had done overseas and figure out what was interesting and what was garbage.

Then one day I realized I had an entire album and that I had made it all over the world. My experience making albums before this was that you lock yourself in the studio for two weeks, make the album, and it’s a documentation of the art in that moment. This could not have been more the opposite. I had, in the most literal sense, a wide perspective. I would work on something in South Korea, then I’d come home and be like, “this sounds like someone recorded it in South Korea at 4 a.m. and they’re jet-lagged. But this one vocal part is really cool. Let’s build on that.[/quote]

You can watch the video for ‘I Wanna Get Better’ above.