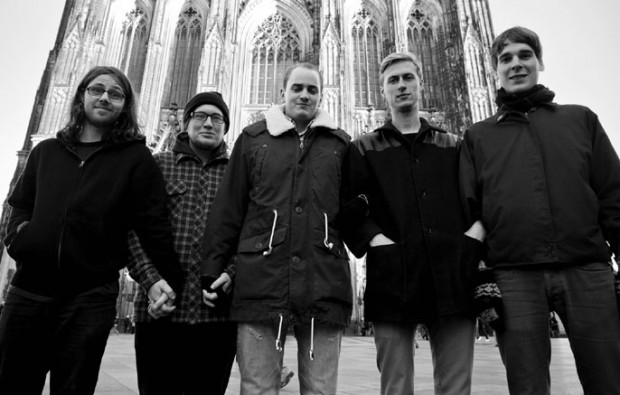 With a debut album due out on 4 March; Leeds rockers EAGULLS have recently been announced as support for Franz Ferdinand UK tour later this year. The five-piece have also just performed on the The Late Show with David Letterman in America. We caught up with singer George Mitchell ahead of their own UK dates to talk about touring and the new album:

Soundcheck: You’re currently on a run with Parquet Court, how’s that going?
George Mitchell: Yeah, well we’ve just finished that; we just did three UK dates with them – London on Sunday and last night was a night off to go and get drunk.

SC: You’ve just performed on Later with Letterman in the states. How did that come about and what was your experience of it?
GM: It was just surreal really, just going on stage – there are just TVs everywhere in back that you can’t escape it. You’re just watching Letterman constantly and suddenly you just walk into the TV really – then you’re just on telly. It was good.

SC: You’ve been invited to open for Franz Ferdinand on their UK, how are you feeling about that?
GM: We’re looking forward to it, it’ll be really good to play to that many people. As long as we can get as many people to hear our music the better, it’s a really good opportunity for it. Franz Ferdinand are one of those mainstream bands but they’re still have a nice sound about them.

SC: Do you feel less pressure being the support act for a big band; or do you feel like you need to go out there and impress the crowd?
GM: Its more to do with sound-guys when you’re playing a bigger stage as a support act. Sometimes they don’t have the time of day and put all their attention onto the main band – but we are looking forward to it and it should all work out fine!

SC: You’ve got your own headline shows coming up over the next few weeks – which shows are you looking forward to on those?
GM: The main one is obviously the Leeds show. We’re planning on making it a really do; the last time we played it it was pretty crazy, someone broke a leg and someone broke their rib so if we can top that, then we’ve got an A*.

SC: You’ve been confirmed for a couple of summer festivals already, are you planning on adding a few more and which are you excited about?
GM: I’m pretty excited to be going to Barcelona, we always enjoy going there but other than that, I honestly can’t think of anything that we’re really looking forward to. We just; and I hate the saying, go with the flow. We get in the van and go do what we do.

SC: You’ve got your debut album coming out 3 March and you’ve already aired a couple of tracks from it, including ‘Tough Luck’ and ‘Opaque’ – what’s response have you received so far?
GM: It been really good. It’s nice to hear what people have to say about it and its been nearly always positive. Its really nice for us to put our music out there and give the opportunity for more people to listen to us and to this sort of music.

SC: Do you enjoy spending time in the studio – or do you want to get out there and play songs in front of people?
GM: It’s a bit of both really. Because we’re always playing live its a bit of a struggle to get time to sit and write so we’re normally writing at shows. We enjoy live shows probably the most because it captures the energy and everything we embody. Doing that is a key thing for our band, but the good thing about going into the studio is trying to capture that sound is always interesting.

SC: What’s been the inspiration behind the album?
GM: The sound we create is always along the lines of punk music – but thats just the output without any communication. I think we’re more inspired by; not music, just ongoings of  everyday life – thats what inspires our creativity. We all like punk bands and stuff like that.