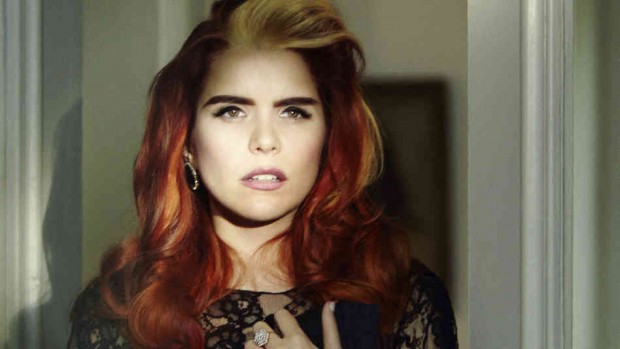 Just 48 hours before the show at the Symphony Hall in Birmingham, PALOMA FAITH was in hospital on a drip – with the prospect of cancelling her extensive UK tour. However, defying doctors orders – the actress and singer-songwriter restarted her UK tour in the second city.

Opening for the show was North Californian folk singer Brett Dennen. With an unusually pitched voice, he took to the stage with a second guitarist to air material from his recent album Smoke and Mirrors. With an initially apprehensive Birmingham crowd, in the all seated venue, it soon became clear why Brett was personally invited onto the tour by Paloma. The crowd warmed, ‘Wild Child’ had a Counting Crows vibe – yet his personal, songwriting seems more raw and honest. By the end of the set, Brett had the crowd singing the chorus to an upbeat summery ‘Comeback Kid (That’s My Dog)’.

It was Paloma Faith who was topping the bill and was closing the evening at a near full Symphony Hall venue. Renowned  for being extrovert, it was evident from the very start of A Perfect Contradiction funk track ‘Take Me’ that this was going to be a show. Taking to the stage with her three backing singers, the quartet danced around the expansive stage; climbing around the seven other musicians on stage to kick-off the show in emphatic style.

It wasn’t obvious at all that Paloma was ill, her 2012 Fall From Grace track ‘Picking Up The Pieces’ ignited the crowd as they clapped and sang along to the note-perfect pint-sized singer. The setlist for the fifteen song set featured heavily on her latest release A Perfect Contradiction; which has been reissued – as the singer put it, “Just in time to fit inside Christmas stockings for anyone that hasn’t got the album yet.” The extra track from the reissue (fully titled A Perfect Contradiction: The Outsiders Edition) made an impression in the set; ‘Its The Not Knowing’ is Amy Winehouse-esque soul funk track however it’s ‘Ready For The Good life’ which really got the crowd (literally) out of their seats to dance along.

The singer failed to delve into her back catalogue, there were no tracks from before her 2012 release; meaning obvious omissions included ‘New York’ and ‘Stone Cold Sober’. However, this didn’t seem to deter the crowd as the singer approached the end to her impressive set. A stunning vocal to ‘Only Love Can Hurt Like This’ led to the crowd cheering throughout the track.

It was a three song encore which closed the show as well as it began – starting with her more soulful version of ‘Changing’ – her recent UK Number 1 single with Sigma. The show was closed out with the crowd back on their feet to sing along to ‘River Deep, Mountain High’ – again, impressing with powerful and note-perfect vocals.

The actress and singer songwriter clearly wants to see fans and continue the UK tour; however, visibly there doesn’t seem to be anything missing from the show – the stunning performance ensured fans left more than satisfied – and with a teaser of an arena tour brewing in 2015, it could be another night out next year!