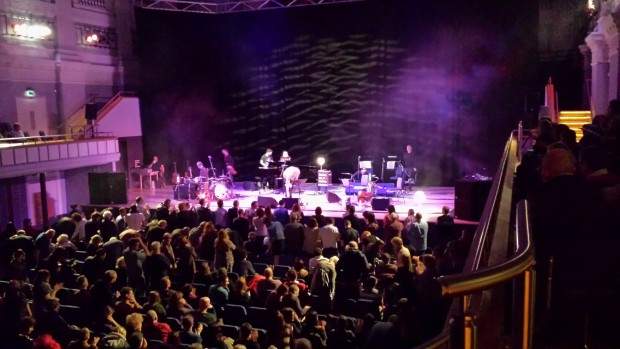 There has always been a degree of intrigue and mystique woven into the sound of Scott Matthews. An opportunity to listen to his delicate, soulful compositions is one that should never be passed up, a truth belied by the unfortunate empty seats in the otherwise fabulous Birmingham Town Hall.

The stage was set beautifully, carefully positioned instruments and stage lighting in the form of a variety of lamps created the impression that the audience were a part of an intimate personal performance.

Supporting himself in a show of two halves, Scott enthralled the enthusiastic fans with a set list drawing heavily from the mesmerising 2006 album, ‘Passing Stranger’, interspersed with newer tracks and sampling some of the delights of Home, (part 1), released earlier this year.

Matthews took to the stage in characteristically humble and slightly abashed manner, allowing the music to connect throughout his solo set. His ceaseless retuning of an array of guitars was testament to the artist’s perfectionism, which always translates into a flawless individual performance. Backed by a simple black sheet and a smoky atmosphere, there were no distractions to the sheer musicality of this enthralling performance.

The real delights of the show were saved for the second part of the show. Joined on stage by an extraordinarily talented sextet, comprising cello, violin, piano, drums, flute and trumpet, Matthews’ unique take on blues and folk really came to life. Particular highlights include the vibrant ‘Dream Song’, the faithfully reproduced ‘City Headache’ with its melancholic charm and the indomitable ‘Elusive’.