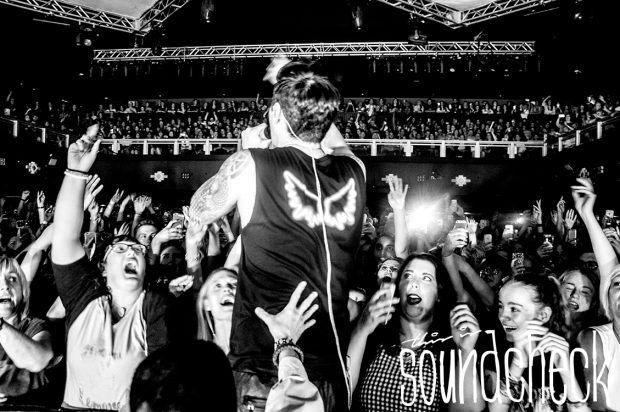 After opening their surprise and intimate UK Tour with a hometown show in Dublin only days before, tonight The Script are set to play what is for them, a very intimate date at Birmingham’s o2 Academy.

Support tonight is from JP. Cooper whose pop and blues based tracks including ‘Birthday’, ‘Passport Home’ and ‘September Song’ went down incredibly well. After playing a well received set at this years’ V Festival only a few days before, JP’s lovable persona was warmly received by a dedicated crowd who were predominantly there to see the headline act.

At quarter to nine the venue more or less goes black and an impressive light show showers the stage as the band arrive to their places. The opening notes of new track ‘Rock The World’ begin, front man Danny O’ Donoghue strolls on moments after the rest launching straight into the vocals with confidence.

The Script have never been anything but a flawless live act. Although they are a band not to everyone’s take, depending how you view pop music, tonight they do nothing but impress. Showcasing their first album in three years, ‘Freedom Child’, which is due 1st September?

Tonight they bring not only a wealth of new songs with them, but a huge number of hits from their arsenal and somehow, manage to cram their brilliant arena show in to a truly intimate venue. As they launch in to the third song in the set; ‘Paint The Town Green/Good Ol’ Days’ Danny is jumping from the stage in to the front rows to get up close and personal with his adoring fans.

They may not have played live for a while, but tonight it doesn’t show. The set is polished and well rehearsed. The new tracks; ‘Arms Open’, ‘No Man Is An Island’ and the single ‘Rain’ are as warmly received as the rest of the set, the latter receiving one of the biggest sing-a-longs of the night.

Pulling in tracks of old, we are treated to high energy versions of; ‘Superheroes’, ‘Science & Faith’, ‘For The First Time’ and ‘If You Could See Me Now’. One of the biggest receptions is of course for the classic ‘The Man Who Can’t Be Moved’ which sees the adoring fans waving their arms and punching the air as if they were at a mid-90’s Oasis gig.

Danny is in a playful mood when he addresses the audience and makes every woman in the room swoon as he tells us “how beautiful you look tonight Birmingham!” Guitarist Mark Sheehan has his many followers too and certainly pulls the moves and acts like the rockstar he has become. Drummer Glen Power is a brilliant percussionist and plays through the whole set effortlessly whilst also looking super-cool.

The penultimate highlight comes just before the end of the set. Danny introduces their classic ‘Breakeven’. Despite only originally making it to number 21 in the UK singles chart, this track appears to have taken on a life of its own. Being an anthem for love and breakups, the room is filled tonight with lovers embracing and singing along lovingly, whilst even the burliest of men on their own at the back of the venue are singing along too.

With no encore tonight, the final track is the epic ‘Hall of Fame’. The band play through this embracing the love from the crowd and again Danny is down in the front rows feeding from the adoration of the audience. The song ends as the patrons in the seats give a standing ovation and the standing area scream and go wild after a brilliant night of high energy, classic pop and rock. The band take a bow and leave the stage as the lights come back on. There is a hint of disappointment from a few that there is no encore, but overall, the public seem very pleased with being able to see their favourites up close and personal.

There has been no announcement yet for further UK dates, but rest assured that with the new album ‘Freedom Child’ about to drop, there will be a further tour soon. The Script are certainly a marmite type band, you either love them or hate them. Tonight, 3,500 people can’t be wrong and they have certainly reaffirmed themselves as a powerful live act and lovable rogues. Long may they continue.