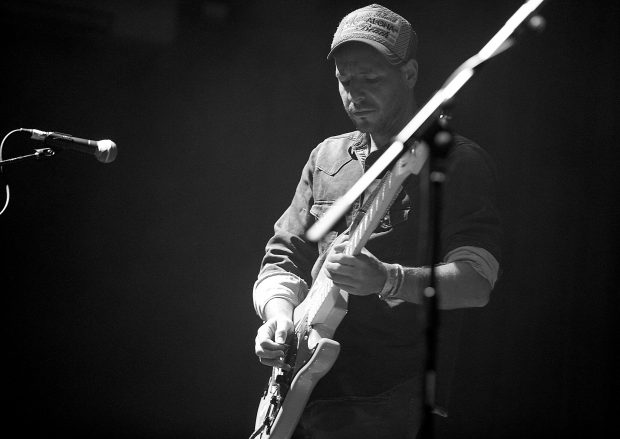 A respectably-sized partisan audience, with enough room to shuffle politely in a thirty/forty-something style, gathered in Leamington’s amazing venue The Assembly, to see Turin Brakes start their final leg of the ‘Lost Property’ tour. And who knew that this was the seventh album for a band that kicked off in 1999 with a promising debut EP and had invented a musical ‘hygge’, in London, years before those Danes got round to promoting it as their go-to life philosophy?

Critics have been quick to praise Turin Brakes’ longevity, present at the rebirth of acoustic folk rock, long before any Mumfords or associated siblings had made their mark, and outlasting similarly rated ‘classmates’ such as Athlete and The Thrills.

Olly (lead vocals, guitar), Gale (guitar), Eddie (guitar) and Rob (drums) expressed their pleasure at being back in Leamington, while their happiness at being back on tour was readily conveyed in their beautiful harmonies, driving drums and rousing prog rock guitar stand-offs in the front line.

‘96’ and ‘Keep Me Around’ – both from ‘Lost Property’ – and ‘Mind Over Money’ – from ‘The Optimist’ – opened the set. Alongside the regular calls of a persistent concertgoer for ‘JackInABox’, these songs set the mood for the evening as another nine tracks came from the two albums that currently frame the musical history of Turin Brakes’.

All songs, whether new or tried and trusted, blended seamlessly. The ripple of applause grew louder track by track, so by the appearance of regular live favourites like funky and fresh ‘Pain Killer’ and the gentle build of pace in ‘Fishing For The Dream’, the crowd was fully engaged. ‘Future Boy’, written when Olly and Gale were just 16, with its shades of George Harrison’s guitars and Lou Reed’s spoken vocals, was a real highlight.

‘Long Distance’ and the psychedelic punch of guitar-gasmic ‘Black Rabbit’ ended the impressive set. Then Mumford and Suns-esque ‘Sea Change’ changed the tempo briefly at the start of the first encore with its strains of Shirley Ellis’ ‘Clapping Song’ and Madonna’s ‘La Isla Bonita’, before ‘Brighter Than The Sun’, surely one of the tracks of 2016, spread its beautiful echoes and entrancing dramatic pauses. The jamming funk of ‘Underdog (Save me)’ was rapturously received and it was the right time for Gale to capture this moment with a phone shot of the audience.

The Brakes were happy to test reasonably uncharted live waters in their second encore rewarding those audience cries for ‘JackInABox’, before finishing with a tight version of ‘Slack’.