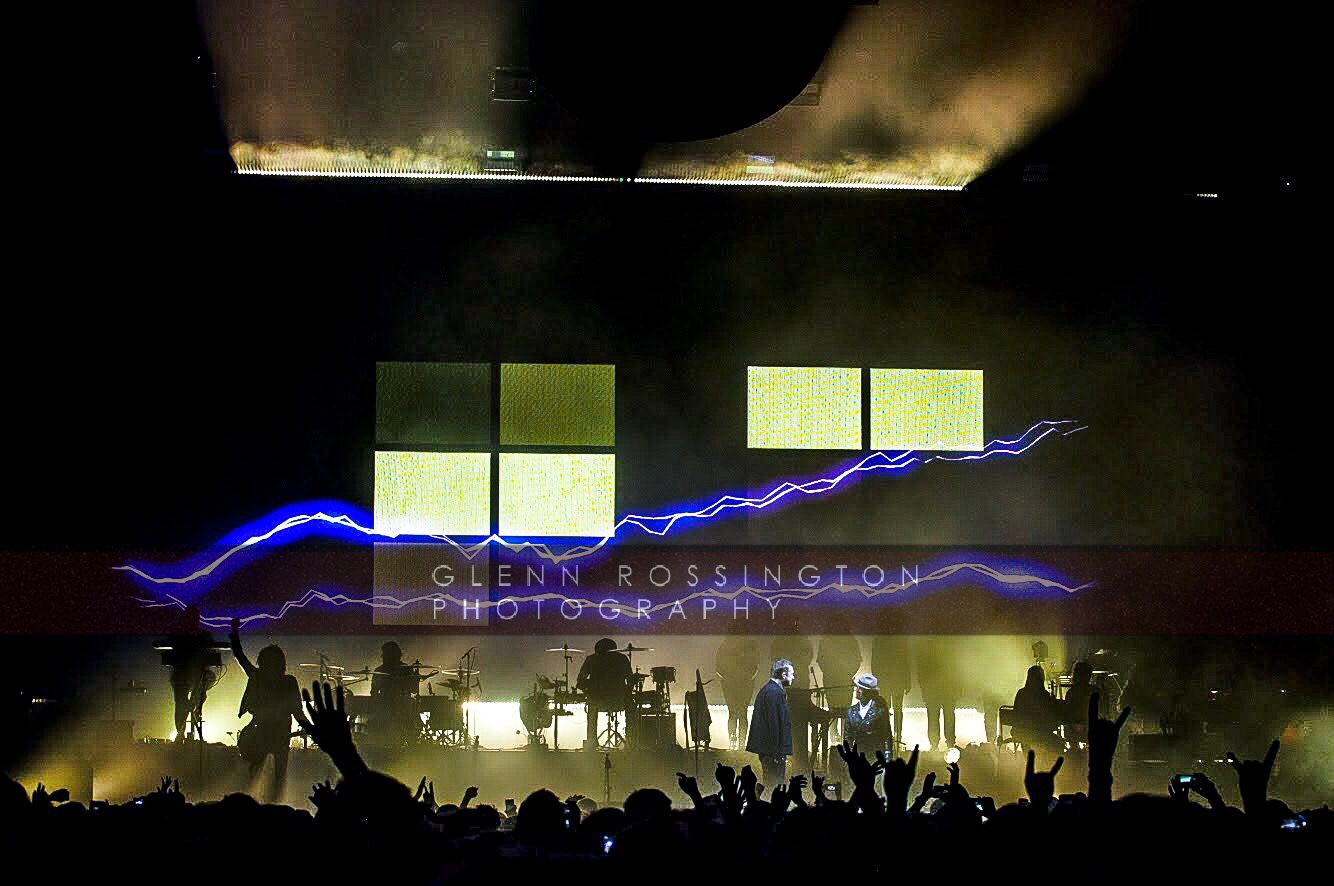 In 2001 when Gorillaz first embarked upon a set of live dates, the idea was to perform behind a huge screen of animations to give the feel of the cartoon band coming to life. Fast forward 16 years and gone are the days of focussing on the art and instead, creating a huge show which will blow away the audience. With the ‘It’s all about the show’ being the new mantra, the Gorillaz live experience has come along way.

Tonight, on what is surely one of the coldest days of the year so far, Damon Albarn & Jamie Hewlett’s animated creations take to the stage of the Birmingham Arena to a sold out show. With the audience having being warmed up by Little Simz, the entire auditorium is heaving and ready to be blown away. That is exactly what happens within the first song. Opener ‘M1 A1’ sets the tone for a fast, frivolous and endearing show.

Albarn is pacing around the stage throughout the entire 110 minute show, coming down to the front rows on occasion and interacting with the entire room at every opportunity. Having released their fourth album ‘Humanz’ earlier this year, every song in the set tonight whether old or new is greeted with sheer enthusiasm and joyous applause.

There are many highlights throughout the show, in fact with a performance of this calibre, every song could be a highlight. Early winners include ‘Last Living Souls’ and ’19-2000′. The first of the special guests arrives on stage as the band launch in to a loud and punky rendition of ‘Charger’, Pauline Black joins Albarn on vocals for a tight rendition. Rap legends De La Soul make their first appearance for ‘Superfast Jellyfish’ which closes the first act.

The rest of the night follows suit, hit after hit and guest after guest. On of the fun parts of a Gorillaz show in 2017 is to see who will show up to do guest vocals. Tonight we are treated to: Bootie Brown who guests on ‘Dirty Harry’, Vince Staples on ‘Ascention’, Peven Everett on ‘Strobelight’, Jamie Principle and Zebra Katz on ‘Sex Murder Party’, Little Simz on ‘Garage Palace’, De La Soul return for ‘Feel Good Inc’ and Little Simz joins for ‘We Got The Power’.

We are also treated tonight to the tour debut of the live string section. Previous dates have seen synthetic strings added to certain tracks throughout the show, but having live string perform on tracks such as: ‘Every Planet We Reach Is Dead’ and ‘Melancholy Hill’ adds to the atmosphere.

‘We Got The Power’ tonight closes the main set, but it is not long before Albarn and Co. return to the stage for a 5-song encore. It is clear to see that everyone on the stage, and even the stage crew are having a lot of fun tonight as there is barely a moment where they are not smiling or singing along. The encore is made up of; ‘Hong Kong’, ‘Kids With Guns’, ‘Clint Eastwood’, ‘Don’t Get Lost In Heaven’ and the epic ‘Demon Days’.

Gorillaz are not for everyone, including the more hardcore of Blur fans, but tonight there is not a single person who seemingly didn’t enjoy the performance. Having been initially written off back in 2001 as a one trick pony amongst certain music press, Gorillaz have become a force to be reckoned with. From headlining huge festivals across the globe to even playing their own festival in Margate, it is easy to see why Gorillaz are classed as one of the biggest acts in Britain.