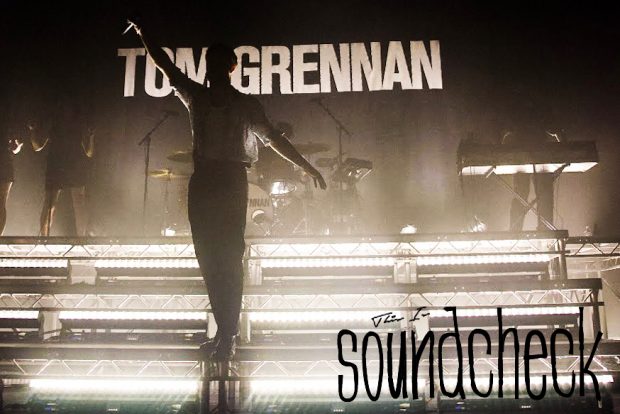 Hot on the heels of an incredible debut album, an impressive World Record for ‘The number of concerts in different towns in a single day’, and a summer of high profile festival slots, the “Man of the Moment”, Tom Grennan arrived in to Birmingham’s o2 Academy to a rapturous chorus of delight.

Standing alone atop the drum riser, Grennan launches in to an acoustic solo rendition of ‘Sweet Hallelujah’ which sees the first of the night’s epic sing-a-longs from the Birmingham Chorus.

With the band joining him, he puts down his acoustic guitar and prowls around the stage with the fire of a man on top of his game. ‘Royal Highness’ and ‘Praying’ complete the opening trilogy and taking a moment in to accept the jubilant atmosphere, Grennan’s face is beaming with a smile as wide as the Cheshire Cat’s.

The set is peppered with highlights as each track from his debut album ‘Lighting Matches’ showcases his fast coming trademark vocals, and highlights further why the Boy from Bedford has amassed a huge following based on his live shows alone. ‘Barbed Wire’, ‘Secret Lover’ and ‘Run in The Rain’ show off all elements of his impressive raw talent. Great songwriting, cheeky persona and his confidence really do fill the room.

Recent single ‘Lucky Ones’ sees the audience screaming the words back to him, and the main set closes in perfect fashion with his hit ‘Found What I’ve Been Looking for’ literally raising the roof.

The encore begins with ‘All Goes Wrong’, a solo rendition of his track with urban legends Rudimental, and thankfully, nothing does. ‘Little by Little Love’ sees the audience sway along with him. Finally the last song of the night is ‘Something in The Water’. As the song comes to a chaotic conclusion, Tom thanks us for coming tonight and promises to return again soon. With professionalism and confidence of this calibre, it surely won’t be long before the jump to Arena venues following in the steps of Dua Lipa, Ed Sheeran and others.