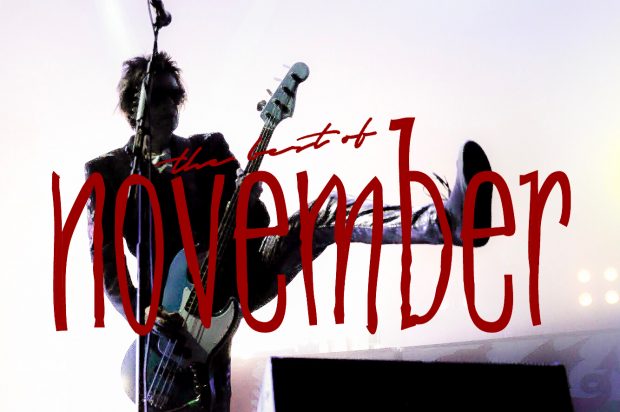 As we fast begin to approach the end of 2018, this is a roundup of what we consider to be the Top Ten events happening in November.

Chris – 17th-28th November.
Hot on the heels of the recent release of the incredible second album ‘Chris’, Heloise Letissier will be embarking upon a number of dates across the UK, bringing the unmistakable stage show to a wider audience than previous. With recent hits;‘Girlfriend’, ‘5 Dollars’ and ‘Doesn’t Matter’joining the likes of ‘Saint Claude’ and the worldwide hit ‘Tilted’, these shows are sure to be nothing short of breath taking. Chris will be playing: Bournemouth International Centre, Hammersmith Eventim Apollo, Birmingham o2 Academy and Manchester o2 Apollo.
Tickets priced £37.50 are availablenow.

Anne-Marie – 19th-29th November.
After releasing her debut solo album ‘Speak Your Mind’ back in April, and numerous hits including ‘Ciao Adios’, ‘Alarm’ and ‘Rockabye’ (with Clean Bandit). The chart-rising star is set to play a handful of UK dates ahead of a full UK Tour next year. Anne-Marie will play: Manchester Academy, London o2 Brixton Academy, Glasgow Barrowland and Birmingham o2 Academy
Tickets priced £23.50 are available now.

Miles Kane- 22nd-30th November.
On the back of his third solo album ‘Coup de Grace’, Miles Kane will be reaching out to audiences far and wide as part of a huge UK Tour which rolls in to December. Support across all dates comes from Manchester’s Cabbage. Miles Kane will play: Glasgow Barrowland, Manchester Academy, Norwich The Nick Rayns LCR, Birmingham o2 Institute, Leeds o2 Academy and Hull Univeristy Union.
Tickets priced £22.50 are available now.

Bring Me The Horizon – 23rd-30th November.
Ahead of their new album ‘Amo’ to be released next year, Sheffield’s metal sons Bring Me The Horizon will embark upon a UK tour. Ollie Sykes and crew will be bringing their unique brand of metal hits including ‘It Never Ends’, ‘Happy Song’, ‘True Friends’ and stunning new single ‘Mantra’ to the live arena. Support across the dates is yet to be confirmed. Bring Me The Horizon will play: Birmingham Arena, Leeds First Direct Arena, Glasgow SSE Hydro, Cardiff Motorpoint Arena and two Sold Out nights at London Alexandra Palace.
Tickets priced £39.50 are available now.