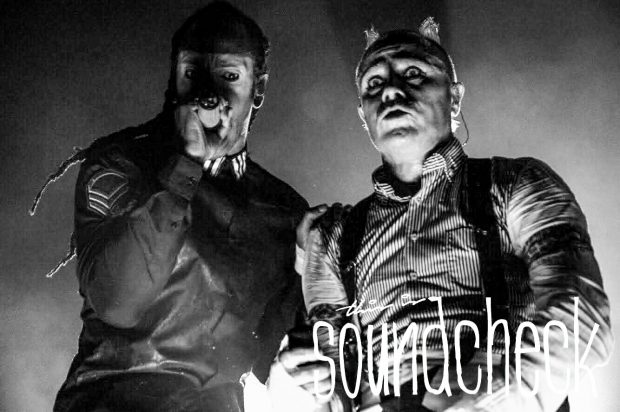 Since the early 90’s dance explosion into the mainstream, The Prodigy have always remained vital. From the 1991 debut of ‘Experience’, through to 1997’s ‘The Fat of The Land’ and right through to 2018’s ‘No Tourists’, there is hardly a blip in their career where they have become irrelevant.

After last playing Wolverhampton’s Civic Hall last December, nearly 12 months later they are playing a Sold Out headline show at the Arena Birmingham in support of their excellent latest album.

Opening up proceedings are the ultimately bizarre American Rap-Rockers Ho99o9 (pronounced as ‘horror’). Their short eclectic set was fascinating in the respect that it appear to divide tonight’s audience.

Nevertheless, by the time the lights dipped and the huge gauze hiding the stage lit up embellished with The Prodigy’s spider logo, the audience were quite simply “up for it”. Opening with the awesome ‘Breathe’ from ‘The Fat of The Land’, tonight’s setlist was perfect. A healthy mix of their impressive back catalogue and new slices from latest album ‘No Tourists’.

Frontmen Keith Flint and Maxim were in fantastic form, bouncing around the stage and controlling the audience from the palms if their hands. Highlights from the set included; ‘Omen’, ‘Firestarter’, ‘Resonate’, ‘Nasty’, ‘Voodoo People’ and a perfect combination of ‘No Good (Start The Dance)’ segueing in to the finale of ‘Smack My Bitch Up’.

The encore brought an even higher level of ecstasy amongst the crowd as they launched in to ‘We Live Forever’ and a rare performance of 1992’s ‘Fire’. ‘Take Me To The Hospital’ erupted throughout the arena as the audience bounced and raved along in unison. The finale of new single ‘Timebomb Zone’ saw the rave continue even as the band left the stage for the final time and the strains of ‘Out of Space’ filtered through the venue’s PA.

Always a vital band in the musical soundscape of an ever drowning Pop dominated chart world, The Prodigy know how to electrocute a perfect show to the most stunning finesse.