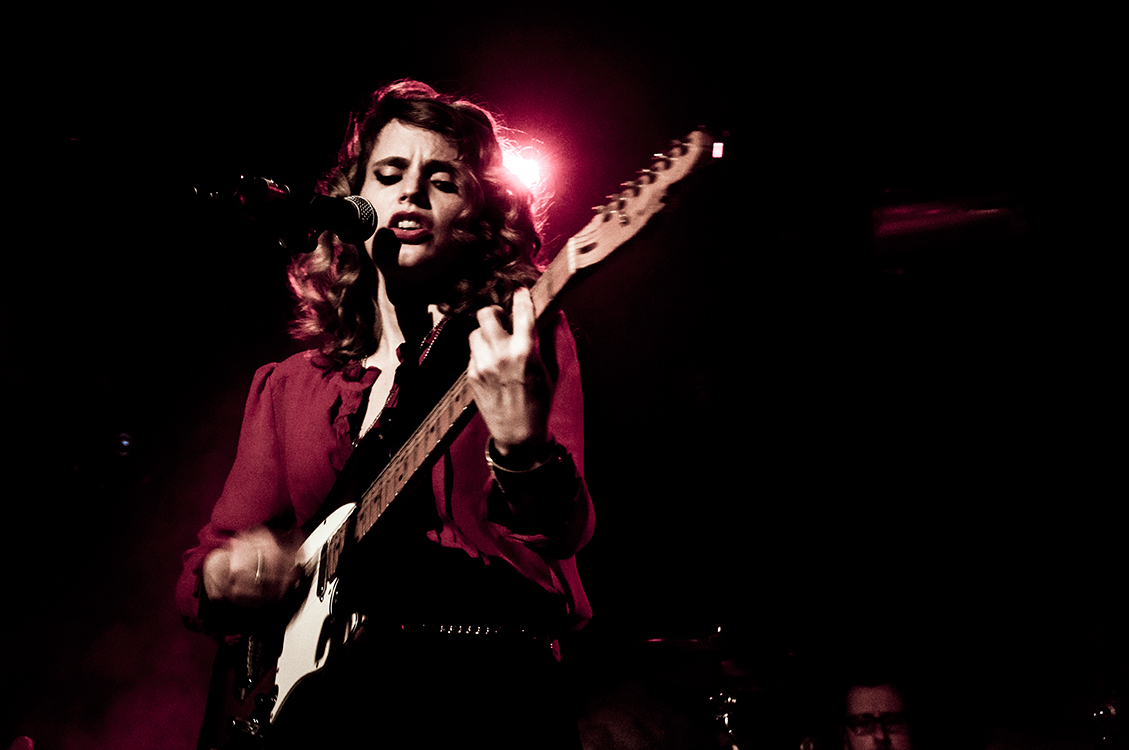 ANNA CALVI arrived on stage at the rather intimate Library venue in Digbeth to an applause worthy of the biggest superstars. The humble and shy songstress stood mid stage to take a welcoming bow to the patient audience before picking up her guitar ready to put on one of the finest shows seen in a long time.

Set opener Suzanne And I from her debut album was beset with a minor sound issue. Halting the song with a bit of comedy banter towards the audience was one of the few interactions of the night. Most artists would have stumbled with this issue, but for Calvi, it seemed to spur her on to perform better. Sliding effortlessly in to Eliza, recent single from her highly regarded second album ‘One Breath’ was performed almost with venom. Calvi’s vocals soaring high and wrapping it’s sultry tones around each member of the audience.

One thing to be said for Anna Calvi is that no one can fault her performance. Each track from the 19-song set was performed as if it was the last. On record she is sublime, in the live arena she becomes an absolute star. From the experimental semi tribal-dance of Piece By Piece, through to a squealing 3 minute guitar solo in Cry, a solo and electric cover of Bruce Springsteen’s Fire and the celebratory call to arms that is Desire, she is stunning.

It’s hard to pick out a single highlight as the whole set was incredible. It is rare to find a talent that is genuine, one that can silence a whole room with a single whisper of a lyric, yet this is exactly how Calvi commanded the room. Regardless of whether she wanted it or not, she had the entire room in the palm of her hand. At one point during the tribal-esque breakdown of Carry Me Over, as she kicked in with a stunningly loud and impressive guitar solo, a member of the bar staff even stopped serving and uttered the words “wow”.

Along with the Bruce Springsteen cover, we are also treated to a cover of Elvis Presley’s Surrender. Formerly a B-side to the Blackout single, you would be mistaken for mistaking it for a Calvi original. Her spin on it is unique and certainly makes it her own. The room is again silenced for the quiet and moody b-side A Kiss To Your Twin. The hauntingly beautiful and delicate lyrics hanging in the air of the intimate venue and sounding so perfect.

For the majority of the set, the audience are respectful. Applauding after every track, yet there is that rare moment of next to no chatter whatsoever. Anyone who begins to whisper is met with cold stares from others. As soon as Desire is performed to an exciting and thunderous climax, the room erupts. It was clear to see Calvi was taken aback by the sheer force displayed as she steps away from the mic to take it in and smile broadly. The set finishes on a very intense rendition of Love Won’t Be Leaving. Again differing from the recorded version by being louder, rawer and incredible. The encore is made up of Bleed Into Me and Blackout, the latter making everyone in the room feel seduced by her delicate hushed tones. The encore closes on a frivolous version of debut single and Frankie Laine cover Jezabel. The room erupts into a sing-a-long and closes the gig on an absolute high note. Calvi gratiously steps to the centre stage position and bows to the audience in appreciation before exiting stage right.

It seemed like there was not one member of the audience on the way out who did not utter the phrases “what a show” or “that was incredible”. It seems that the general concensus is that this gig was an absolute highlight. Calvi certainly deserves the accreditation she is warmly recieving across the globe. Let’s hope that she returns for more shows in the UK soon as after that, another fix is definitely required.