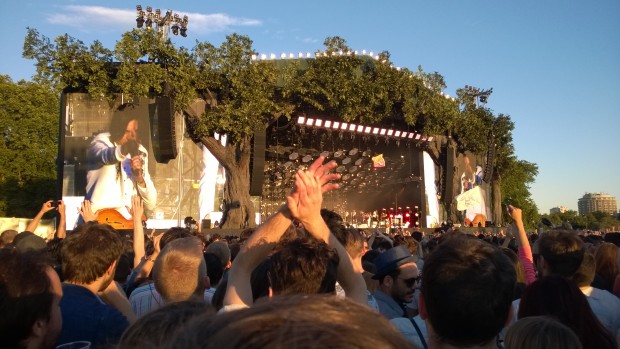 If ever one performance could cement a band’s importance at any moment in time, then Arcade Fire’s sublime Glastonbury headline slot might well have done the job. Regaling 70,000 people in one field is one thing, but to hold rapt millions of television viewers as they did so perfectly is truly astonishing, especially given that they are a band who, by Win Butler’s own appraisal, haven’t had a hit single. What they have had, however, is four of the best albums to be produced in the last decade. While they may be kicking off the British Summer Time season, tonight also marks the final date of their phenomenal Reflektor tour, and indeed what may be their last live show in the UK for a very long time.

Perhaps because of a curfew imposed by the show’s Hyde Park location, the band take to the stage at 8:30pm, the hottest day of the year still far from over. It means that a set list adjustment is in order. With the Reflektor tour so heavily invested in the (literal) smoke and mirrors that make their shows such a stunning visual experience, there are a few songs whose impact can’t really be felt until the sun starts to set. It means that usual opener ‘Reflektor’ is bumped down the list, the band instead choosing to start with the swinging rock’n’roll influenced ‘Normal Person’. It doesn’t pack quite the same punch as usual, perhaps because the sound is simply too quiet at this point (something Butler later addresses), but it’s a brilliant choice to get things started.

As they power through a set that draws on material from each of their four albums, it becomes clear not only how much they are adored by their fans, but how much they adore performing for them. Their show is filled with theatrical drama, as in the brilliantly staged ‘It’s Never Over (Oh Orpheus)’, (which sees Régine and a troupe of dancers face off against Win’s main stage performance on a smaller platform in amongst the crowd), but the moments in between are filled with gratitude and love for the fans who are there. It’s hard to believe that the band are unaware of the £2.50 ticket debacle, but whatever the price they paid, every fan gets their money’s worth.

New tracks like ‘Afterlife’ and ‘Joan of Arc’ slot in perfectly alongside anthems like ‘The Suburbs’ and ‘Neighbourhood #1 (Tunnels)’. ‘No Cars Go’ gets a fantastic reception, as does the riotous ‘Ready To Start’. As they bring their main set to a close with the ever perfect ‘Sprawl II (Mountains Beyond Mountains)’, the lighting technicians outdo themselves, dropping the crowd into the gathering darkness perfectly on beat as Régine playfully begs, “I need the darkness, someone please cut the lights”.

While they do technically play an encore, one of the joys of the Reflektor tour has been seeing the weird and wonderful ‘interval’ entertainment. Tonight Hyde Park is treated to the sight of the Pope dancing around to ‘Sympathy for the Devil’, undoubtedly a very deliberate song choice. Once Arcade Fire return to the stage, they play through brilliant renditions of ‘Here Comes the Night Time’ (timed perfectly as the sun finally sets), and ‘Neighbourhood #3 (Power Out)’, each one conjuring up the kind of ecstasy that can only exist in a crowd that knows the end is nigh.

Closing the set, as always, is ‘Wake Up’, the most anthemic song in their back catalogue, and probably one of the best live songs it is possible to experience. There’s nothing quite like a chorus the size of a small town to emphasise how truly euphoric this evening has been. “It’s easy to fall in love in London on a night like this” Win Butler remarks at one point, and it’s hard not to believe he’s talking about the band, and their sublime final performance.