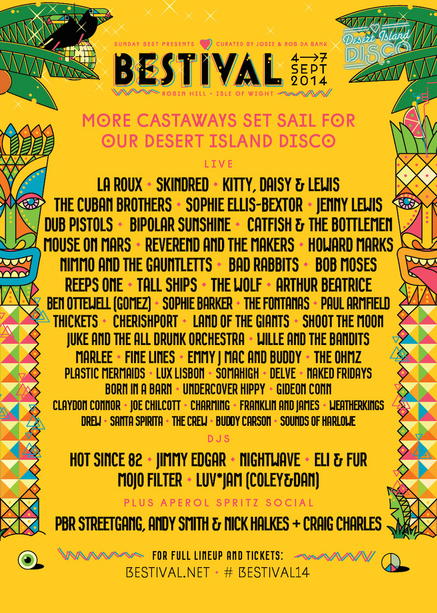 BESTIVAL have announced a new wave of artists set to play the event in September. The festival; held on the Isle of Wight will feature La Roux, Reverend & the Makers and Sophie Ellis-Bextor. More acts announced today include Jenny lewis and Bipolar Sunshine.

The four day event which takes place between the 04 and 07 September will be headlined by Outkast, Foals, Nile Rodgers & Chic and Beck; with London Grammar, Disclosure and Busta Rhymes also set to feature on the bill. The festival;  organised by Rob Da Bank, have also announced an array of emerging acts including; Wolf Alice, Catfish and the Bottlemen, Tall Ships, Arthur Beatrice and The Cuban Brothers.

This year, the event will be based around ‘Desert Island Disco’ – with fancy dress, attractions and areas of the site dedicated to the theme.

Tickets for the event are on sale now – with more information about Bestival available here.