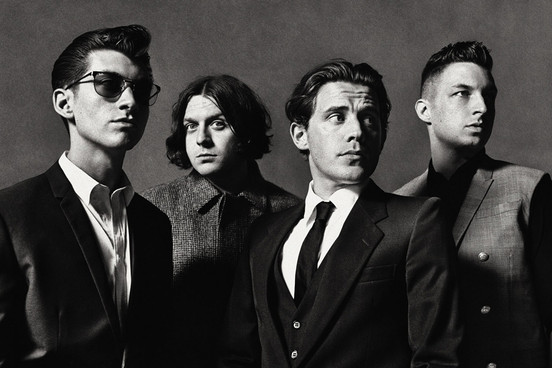 Just over two weeks ago, Arctic Monkeys arrived at the LG Arena to play their scheduled show in front of a near sell-out audience. Just twenty minutes before the tickets doors opening time, the shows signs above the door changed to ‘CANCELLED’. With singer Alex Turner diagnosed with a nasty bout of laryngitis, the show was swiftly rescheduled to now. A minor inconvenience for Monkey’s fans.

Thankfully, the delay didn’t change the support act on the tour, Irish four-piece The Strypes. Whilst the debut album, released earlier this year failing to hit the right note amongst critics, the teenagers (yep, 16 – 18 years old) certainly are captivating live. Performing on the large stage was interesting, stand out hits ‘Blue Collar Jane’ and ‘Hometown Girls’ warmed up the crowd. However upon reflection, the band seemed to spend too long with solo’s to get involved with the audience, the set seemed to merge and become slightly repetitive. Its blatant that the Strypes passion and flair is incredible and as a live band they are unique, it’s a shame that the music just isn’t hugely captivating over a length of a full set.

Arctic Monkeys fifth album, simply titled AM was released earlier this year and after headlining the likes of Glastonbury and Spain’s Benicassim during the summer, this is the first UK Tour from the Sheffield troupe in two years. Opening with the drums and catchy riff to the albums big hit ‘Do I Wanna Know?’, it was clear that those two years was far too long. The first six songs of the set was played with intensity, ‘Brainstorm’ followed by ‘Dancing Shoes’ saw many pits within the crowd form. Then, the manic ‘Teddy Picker’ was welcomed with screeches.

The set seemed to slow, as new album tracks ‘Fireside’ and ‘Reckless Serenade’ were aired to a muted response. However, with huge plays on national radio stations, ‘One for the Road’ was welcomed with the same rapturous response as early Arctic Monkeys material.

Alex only apologised for the two week delay in the performance as the band returned for a three song encore. Greeting the apology with boos, Alex looked sheepish before telling the LG Arena it would never happen again. The performance really stepped up a notch for the encore, which included a stripped back, slowed version of debut album favourite ‘Mardy Bum’ before climaxing with AM single ‘R U Mine?’.

It’s more than understandable that Arctic Monkeys are playing huge arenas; 5 album in, they have the catalogue to impressive whichever songs they perform. With the announcement of a T in the Park headline slot last night, Arctic Monkeys could well be another band to go and see again in 2014.