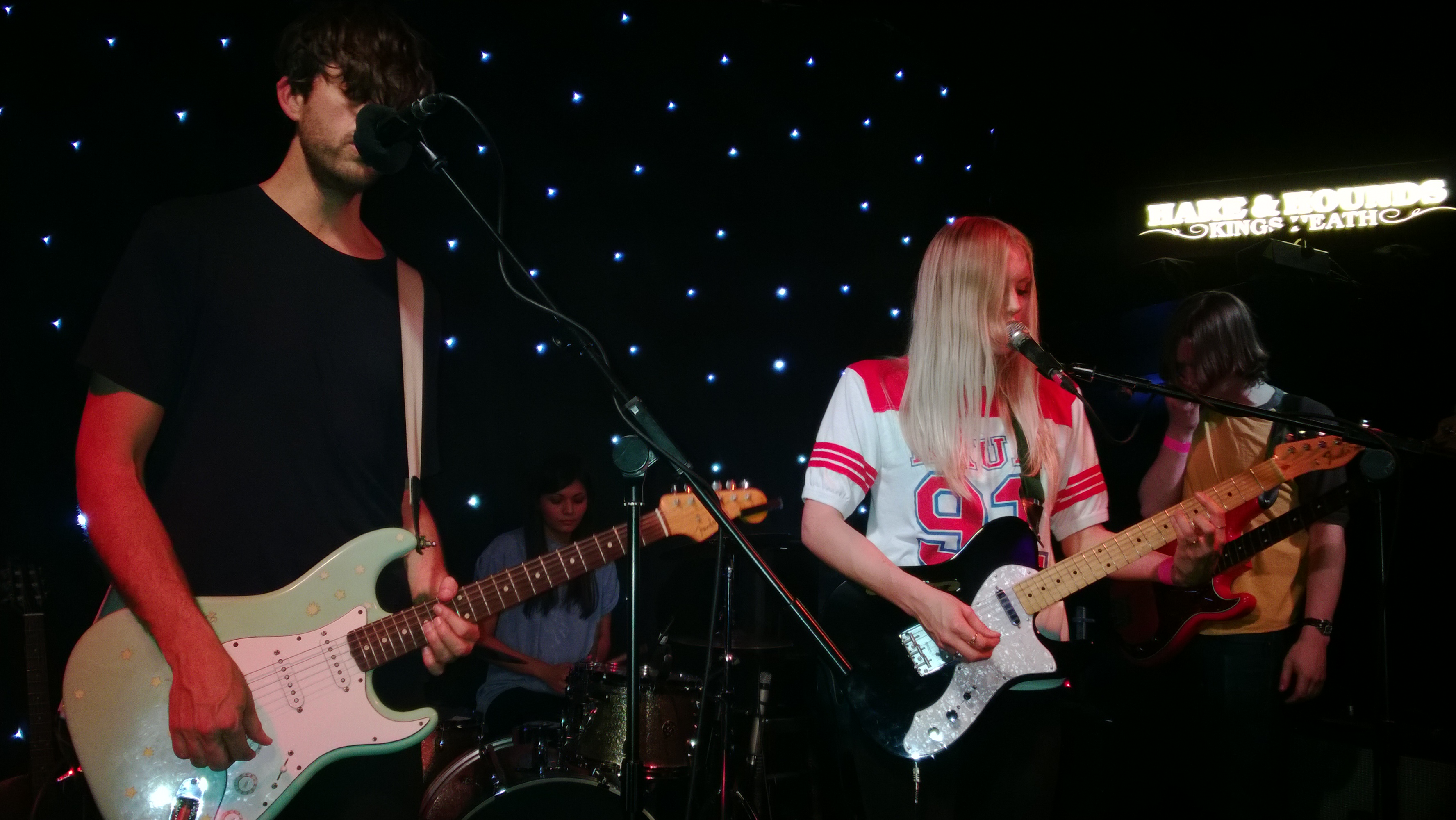 “We haven’t seen much of your city because we can’t see much of anything. It’s the apocalypse apparently. Even on stage.” As a burst of dry ice swirls around him, it’s fair to say that Kacey Underwood, one half of tonight’s headline act Big Deal, has a point. Gig-goers arriving at the Hare and Hounds tonight were greeted with the kind of damp, grizzly weather that feels more Scandinavian than Saharan. Fortunately for Underwood and his partner-in-crime Alice Costelloe, a bit of pollution hasn’t frightened off the dedicated crowd that have joined them this evening.

The night, however, began long before the duo (along with their newly-recruited rhythm section) took to the stage. Local(ish) boys CLUBS got things started in fine form. While they played to an almost deserted room, their perfectly executed performance and catchy, guitar-heavy sound made for an interesting listen. Blending the indie atmospherics of The Maccabees and Two Door Cinema Club with the soaring yet melancholic vocals of KOL’s Caleb Followill, it’s an impressive introduction to the Leicester natives, and one deserving of a much bigger audience.

Next up are EKKAH, also a local band, although this time coming with a noticeably 70s slant. Formed by two former members of The Arcadian Kicks, the band’s two female singers are pitch perfect throughout their entire twenty-five minute set, with the three guys laying down some irresistibly catchy beats. Opening track ‘7AM’ in particular is utterly infectious, with its disco beats and seemingly impossible chorus melody. Another great band to keep an eye on.

When BIG DEAL finally take to the stage, the room has filled nicely. Taking to the stage inconspicuously, the band sound check their instruments and put their heads together in a final huddle, before Underwood turns and gives the nod to the sound desk. A quietly mumbled “Hi, we’re Big Deal” is all the introduction they give, before launching straight into ‘Swapping Spit’, a song whose Cure-esque chord changes and ear-worm of a melody instantly capture the attention of the crowd.

While their sound is generally described as ‘dream pop’, that description doesn’t quite capture their live impact. Of course, much of this might well be to do with their heavier recorded sound on recent second album June Gloom, especially on tracks like ‘Teradactyl’, which becomes a grunge-rock behemoth live, with its Pixies-esque quiet/loud dynamics. ‘Dream Machines’, which recently featured in the Divergent soundtrack, is perfect breeze-pop, its distortion perfectly complimented by Underwood and Costelloe’s ever-present harmonies. ‘Pristine’, with its beautifully sincere lyricism and gentler guitar part, has the crowd nestled right in the palm of their hand.

It takes until the band are over half way through their set for Underwood to beckon the crowd closer. Until now, they’d left a polite distance between themselves and the stage, but with his blessing they press forwards, standing barely inches from the monitors. From there, things feel even more intimate, even more immersive. Their musical washes over the captivated audience, submerging them in the chugging beauty of ‘In Your Car’, and set closer ‘Talk’, a debut album favourite beefed up by the new rhythm section.

As the band make their way self-consciously off stage, a few (extremely loud voices) start up an enthusiastic round of “More! More!” Despite having already given the now-anxiously waiting crowd a reprieve of sorts (having announced their last song slightly prematurely), Big Deal sheepishly return to the room, obviously a little overwhelmed by the reaction they’ve received. Playing the heart-wrenchingly beautiful ‘Close Your Eyes’, it’s an incredible note to leave things on.

If they can keep turning out nights like these, then it’s more than likely that Big Deal will soon be just that, and with very good reason. For tonight’s speechless audience, there’s just the warm glow left behind by a gig that, in every sense of the word, was utterly brilliant. You can’t ask for anything more.