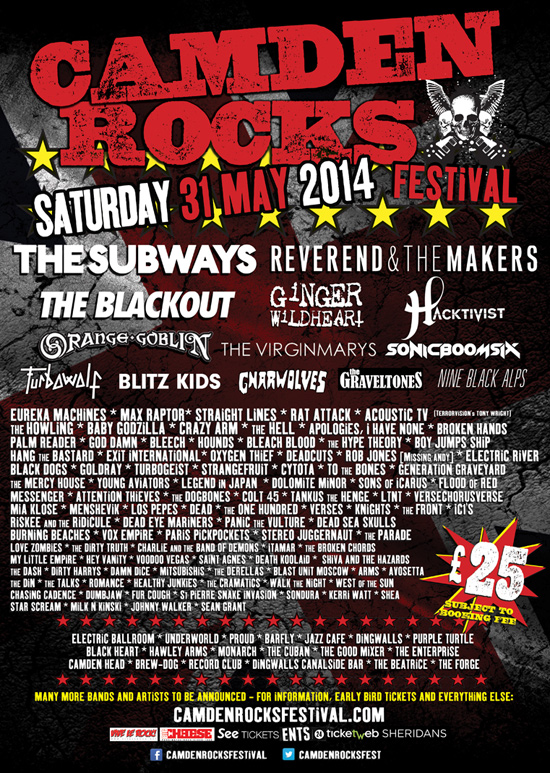 Camden Rocks, one of London’s best Rock’n’Roll city festivals, have confirmed their acts for this year’s one day event. Taking place on Saturday 31st May 2014 across 20 venues in Camden Town, headliners include The Subways and  Reverend & The Makers. In total over 200 acts will perform with The Blackout, Hacktivist, Sonicboomsix, Nine Black Alps, Blitz Kids and Gnarwolves also included on the bill.

“I’m really excited to showcase some of these great new bands I’ve been working with this year. We’re going to set Camden alight (not literally) with the best new music in the UK.”

“It’s great bands like Reverend & The Makers are playing along side the likes of The Blackout, Ginger Wildheart and Orange Goblin as well as all this new talent. It’s a real good mixture and there’s still loads more to be announced.”

“I love the fact that we can be part of something as well established as Camden Rocks,” adds Sonic boom six vocalist Laila. “My early memory is seeing Pete Doherty a few years back and then going to see a friend’s band around the corner. It’s all the best things about a festival without the traipsing around in the mud! So many different bands to see set against the awesome backdrop of Camden Town.”

Full details of the line-up can be seen in the poster above. Following on from last year’s sold’out event,  the festival will be enjoying its 6th annual show this year. Tickets can be found here and cost £25.