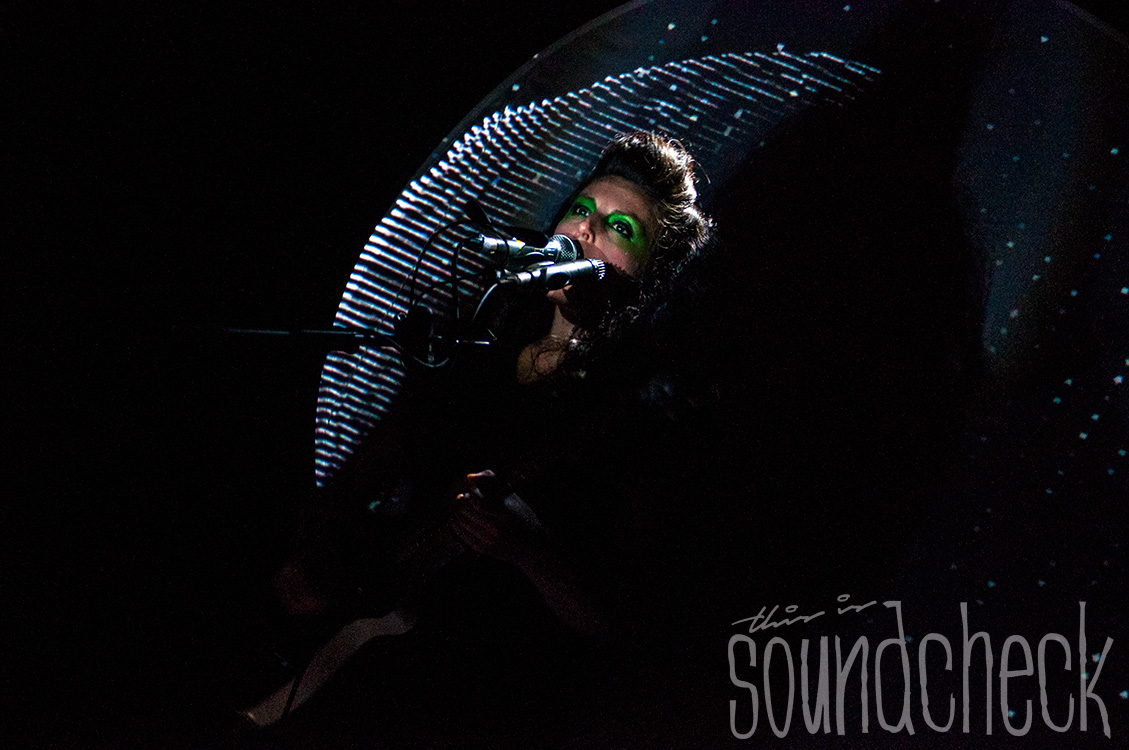 Playing a very rare intimate “hometown” show tonight is the enigmatic Carina Round. The girl from Wolverhampton who relocated to LA and is now a full time member of rock band Puscifer and folk/acoustic act Early Winters – alongside her own illustrious solo career.

The support act tonight is She Makes War. Singer and guitarist Laura ambles on stage on a crutch, later informing us that she broke her foot only a few weeks prior and has only been able to stand on it over the last few days. Her inbetween song banter is second to none and raises a few giggles with her pure dry wit. Her songs come across well, the electric guitar steeped in echo and reverb alongside haunting vocals, the room is filled with an uneasy pressure as we are told tales of loss and deprivation.

Carina makes her way to the stage in a room almost completely shrouded in darkness. The solo spot in the middle of the stage looks like an outtake from Pink Floyd’s ‘Darkside of the Moon’ era shows – a microphone with two mics against a backdrop of a circular projector board.

Once on stage, Carina is crouched down hidden in the darkness as she begins to play with a loop pedal before her stunning vocals take control and we get a stunning rendition of ‘The Secret of Drowning’ from the last album ‘Tigermending’. As the track builds then comes to a shattering conclusion, Round stands up, embraces the guitar and launches in to a loud version of ‘Pick Up The Phone’ from the same album.

The show tonight is in support of her self directed ‘Best of’. An album initially released on vinyl for this years’ Record Store Day back in April, but has now seen a full release on CD. This gives a great insight in to Carina’s songwriting ability and wealthy back catalogue which covers 4 albums and a standalone EP.

Ms Round is certainly unique and tonight is taking the live performance into the realms of visual and audio art. The room is bathed in darkness with minimal spotlights on Carina. When we do see glimpses of her beneath the mix of spotlights and visual illustrations which dance across her outline, we see that she has embraced the late era REM/Michael Stipe and used heavy eye make up which strikes across her eyes. This is possibly the most genius part of tonight and it’s downfall. Although tonight is a showcase of the highlights of Carina’s impressive career to date, it is just too difficult to make anything out. Even from the back of the room, the visual arts don’t seem to capture the imagination the way they should. For the fans who have waited nearly 5 years to see a Carina live show again, there are mumblings on the way out that tonight was both great and a disappointment. Risky might be a better way of describing the show.

The music and Carina’s vocals cannot be faulted however. We get stunning renditions of hits old and new. Highlights throughout the set include ‘Set Fire’, ‘You & Me’, a dirty version of ‘Lacuna’ and ‘For Everything A Reason’. The remarkable ‘Do You’ and ‘Simplicity Hurts’ seem to not quite slot in to the set correctly tonight, but a stunning ‘Backseat’ sees some great audience participation, but yet peaks in the set placement slightly too soon. ‘Let It Fall’ and rousing closer ‘Into My Blood’ more than make up for it.

Past Carina shows have been flawless, both with a band and as a solo artist. Tonight is great but not quite the return everyone was hoping for. Lacking in the visual delight of physically seeing Carina thrash the stage, the strain on her face as she pulls those impressive notes out of nowhere and makes it look easy, these are the only things that leave the show both a delight and slightly underwhelming.

Let’s hope it is not long before Carina comes back to grace our presence on this side of the Atlantic again. If you are heading to see one of her UK shows on this tour, be prepared to see a unique and brave performance piece whilst listening to some incredible music from one of the UK’s and now America’s brilliant talents.