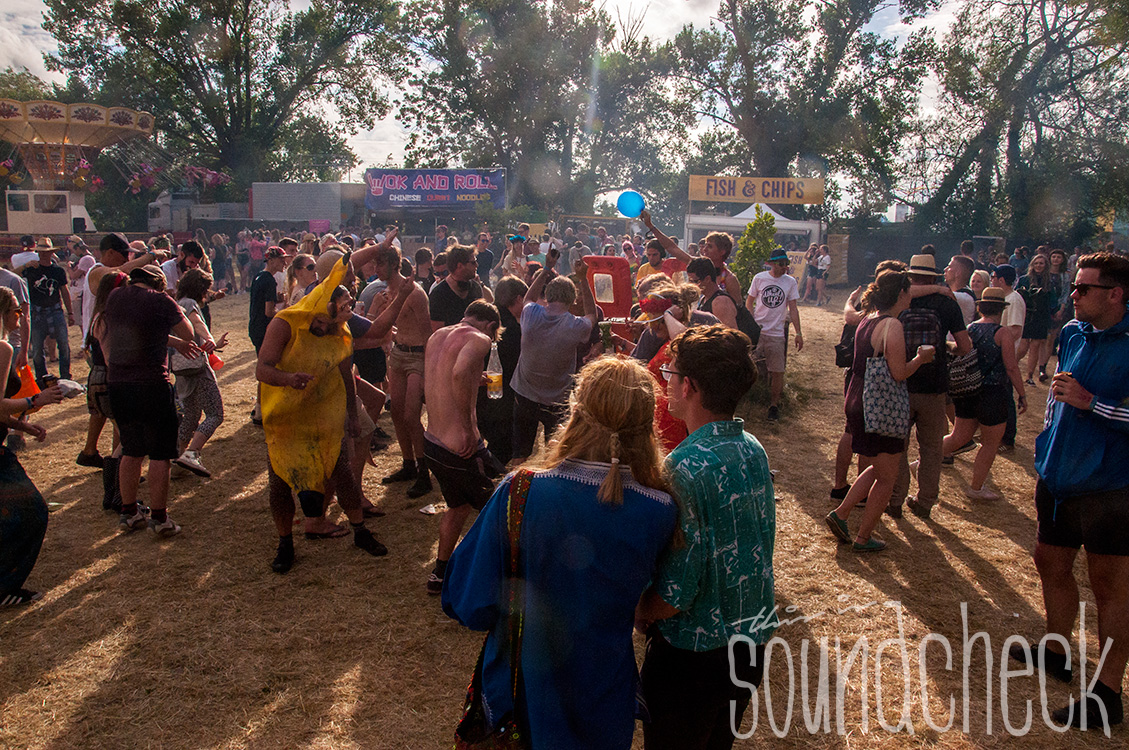 Set outside the village of Steventon in deepest Oxfordshire, Truck Festival is now in its 16th year and posing one of the best smaller festivals lineups going. This year saw the likes of Catfish & the Bottlemen, Kodaline and Manic Street Preachers headlining the infamous Truck Stage. Appearing across the 3-day even were the likes of: Jurassic 5, Circa Waves, Everything Everything, Jack Savoretti, Mystery Jets, Pretty Vicious, Swim Deep, Norman Jay MBE and much, much more.

After the success of the Friday being headlined by Catfish & the Bottlemen, nothing beats a hangover cure than being woken up by the sound of Mr Motivator calling through a vigorous yet simple work out. Incredible sights greet the stragglers wandering in to the arena from the campsite. The crowd is packed out beyond the sound desk and roughly 2,000 people in unison appear to be following Mr Motivator’s every move. From Children to adults, everyone is having fun and seems full of cheer in the heat of the midday sun.

The music today is varied and there are lots of highlights across all stages. An early surprise is held in the “Veterans & Virgins Tent”. Lee Christian and the Prohibition Smokers Club are playing to a minimal crowd, yet offer one of the funkiest and rock and roll moments of the day. With a band dressed in 50’s/60’s attire, Lee Christian is rarely onstage, favouring to wander through the photography pit and on to the barrier to bring his range of funk and soul to those waiting. Each track is delivered with passion and gets the crowd moving. By the end of the set the tent is packed tighter with people outside begging to get in.

Over in the Market Stage, there is a joyous array of acts during the day which seems mildly more intense and varied compared to the main stage. The likes of Bloody Knees, Swim Deep, Fickle Friends, Samm Henshaw and Pretty Vicious pull in the masses. The tent seems to offer a temporary solution to the heat outside but soon charges full as the cataclysm of bodies and mosh pits take over. Surprise hit of the afternoon is Norwegian star Dagny. Having issued the glorious single ‘Backbeat’, the tent is busy as she powers through an all-too-short set of brilliant edgy pop. ‘Fools Gold’ closes her set to cheers and a mass singalong after a heavy rotation on BBC Radio 1.

The highlight in the arena must go to the spectacle that is Young Fathers. Having come off an epic tour with Massive Attack across Europe, the band appear to have taken inspiration in keeping chatter to a minimum and allowing the music to take control. Opening with a powerful ‘War’ drenched in moody lighting, the basslines and drums run heavy through the set. It would be easy to assume that within a few years and brilliant promotion behind them, they could follow in the steps of Massive Attack for sheer performance intensity and visuals.

Over in The Nest, there seems to be a constant stream of brilliance. This seems to be the tent for the younger generation as each act sees the tent packed out. Varying from the likes of Traams and Gnarwolves to the likes of Spring King and Dolls, there is a constant stream of fresh talent on show. There is even time for a surprise early evening show from legends Spector which sees the tent packed to the rafters and almost doubled in size outside with people trying to get in.

One of the highlights of Truck Festival in general is its relaxed atmosphere and brilliant variety for every age. There is a cinema showing movies all day long, a saloon bar which doubles up as a secret venue showcasing new talent every hour. There is a farmer’s food hall selling everything from luxury burgers through to sweets and a large selection of vegan and vegetarian food. There are brass bands playing all over the site, multiple bars offering a variety of drinks and multiple independent local food stores. A unique highlight is the “Wheelie Bin Rave” – 2 guys walking around the site with a wheelie bin each which transforms (the lid is opened) in to a mobile disco. Complete with a mic there is MC-ing over some heavy beats and a party springs up wherever they roam. Genius.

The Barn stage today has a heavy lineup and is made up of the younger and fresher acts of the day. Seeing the likes of Orchards, New Luna, Thyla, Atlas Wynd and Thumper in this environment adds the heaviness of the music and makes it a more intimate part of the festival.

In switching between the Main Stage and the Barn Stage, eyes cannot help but scan over the merchandise stall, it takes a moment to notice, but there is a marquee attached which is selling a huge amount of cds and vinyl from the acts playing this weekend. This tends to include the latest releases alongside rarer items such as any Recordstore Day items which have been left over. Another genius addition to a brilliant festival.

After the wonderful opening of Mr Motivator, the main stage is the hive of activity throughout the day. Again, a varied line up offering music for all tastes. Judas and Esterons offer up some future talent and seem to go down well with the amassing audience. Originally billed for today was singer/songwriter Lauren Aquilina who had to pull out two days prior. She has been replaced by the enigmatic Cameron AG who offers a set full of wonderful synth pop and humorous interludes.

Sundara Karma arrive in the mid-afternoon slot and announce the arrival of the main acts of the day. Sundara offer their unique blend of jangly indie which has won them legions of fans from heavy plays on BBC Radio 1 and XFM. Highlights include ‘A Young Understanding’, ‘Flame’ and a lively rendition of ‘Loveblood’. Their charisma and confidence shine and certainly leave the crowd wanting more. The next 12 months for this band should see wonderful things happen to them in a similar vein to Blossoms.

Rat Boy announces his arrival on stage by spraying bottles of water in to the crowd and launching in to a fast-paced rendition of ‘Turn Around Mate’. The enthusiasm from this young man and his on stage persona could class him as “a bit of a tinker”. The winning factor with Rat Boy is not only his music and witty lyrics, but amongst his cheekiness is a warm charm. ‘Wastemen’ and ‘Fake ID’ showcase what is to be expected from his debut record. Circa Waves follow next with their unique brand of modern day Liverpool Indie Rock. Highlights of their all too short set include ‘Get Away’, ‘Good For Me’, ‘Fossils’ and a raucous ‘T-Shirt Weather’. The wait for album number two shouldn’t be too much longer.

The stage clears and the crowd close in tighter as the anticipation for tonight’s headliners is immense. One of the biggest acts to grace the festival’s stage, and the only act to get a feature-length setlist over the weekend are Welsh wonders Manic Street Preachers. Bringing the highlights of their recent 20th Anniversary tour for ‘Everything Must Go’, the band tonight are on a fine form. Opening with a lively rendition of ‘Motorcycle Emptiness’ the whole crowd are jumping and singing along note perfect. We get highlights such as the rarely played ‘Found That Soul’ and ‘Masses Against The Classes’. Singer James Dean Bradfield seems as if he is in a bitter mood with the recent Brexit vote as he dedicates a scathing acoustic version of ’30-Year War’ to their old record label manager who is here tonight stating “this man believed in us and even then, we would not have gotten away with writing a song like this back then”.

Nicky Wire informs us that the last time they played Oxford they were performing at a University gig many moons ago. The Manics show off their numerous hits from the decades and win over a whole host of new fans even if as Bradfield declares “some of you here tonight were not even born when we released this” before the band launch in to a thrilling and confetti laden version of “A Design For Life”.

The atmosphere across the festival site is one of a party mood. As the main stage closes for the night, the Market stage launches in to a rave centre with performances from Big Narstie and more. Truck Festival 2016 has been a massive success and produced one of the most varied lineups for a mid-range, family friendly festival. Brilliant value for money with lots to do. This year was a blessing that the sun shone so brightly. Roll on next years’ event.